The Times: Iraq’s future hanging Maliki, who has become isolated by the West character

The Times: Iraq’s future hanging Maliki, who has become isolated by the West character 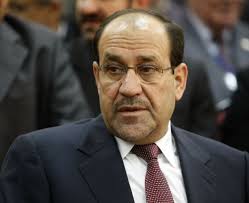 Electronic Lebanese / 21.06.2014 The newspaper ‘The Times’ in the British article titled ‘It’s time to step down Nixon Middle East’, referring to the need for the departure of Prime Minister Nuri al-Maliki before that happens American intervention against state regulation of Islamic militants in Iraq and the Levant (Daash), to be ‘the future of Iraq hanging Maliki, who became the West is seen as a character isolated and without taste, and in the time that think the Prime Minister is surrounded by problems that his presence is necessary to repel attacks Daash, he realizes most of the Shiites in Iraq before the year that al-Maliki has become part of the dilemma the country, not the solution. ‘ The paper that ‘there are some common traits between Maliki and former U.S. President Richard Nixon, who was forced to step down at the beginning of his second term because of the Watergate scandal under the threat of Congress, where he witnessed the Iraqi parliament divided about granting Maliki authority to declare a state of emergency Maybe skepticism in how to exploit that power. ‘ It pointed out that the ‘paranoia among the common traits between the two men, and appeared with equal access to al-Maliki for his duties as snatched all positions of Sunni leaders beginning of the Central Bank and even the intelligence service and some even fled the country, as did former Vice President Tareq al-Hashemi.’ and felt that ‘Maliki’s plan only to face Daash is to mobilize Iraqi Shiites, a solution that will serve as the use of a plate of gasoline to put out the fire and therefore it behooves the West to make sure the end of the role of al-Maliki, which could give some reassurance to the Iraqi Sunnis to fight extremism in their country side by side with the Shiites’.