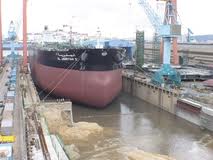 Baghdad (news) .. Demanded the company oil tankers Jabbar Oil Ministry, the federal government approved the allocation of sufficient funds for the purchase of oil tankers giant transport Iraqi crude oil. official told the media in the company master Faleh بجمان (of the Agency news): The number of vessels owned by the company is currently four specialized transport derivatives oil, indicating an intention to build a tanker fifth specialist also transfer oil derivatives. added: Since Iraq is the country’s major oil it needs a large number of giant tankers to export oil, and these need to be approved by the ministry and the prime minister to allocate sufficient funds managed to buy tankers are great for re- Fleet Iraq to its previous status. mentions that the company tankers of Iraqi oil was founded in (1972) and started a fleet of tankers medium-sized and that the number was then seven tankers, In (1975) was built supertankers to become number of carriers (24), including giant and medium through year (1979). , but due to the conditions of war and the age of tankers and the damage done to them led to the deterioration of tankers, In (2003) began oil tankers rise even managed in the year (2007) to buy two tankers are small and then also received two tankers bringing the number four tankers specialized for the transport of oil derivatives. / End