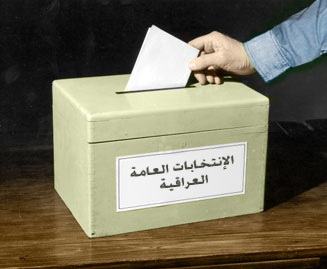 Baghdad (news) / report / .. Approaching the country from an elected House of Representatives, which will be in April of next year, and political expectations Lien these elections be overthrown Bechtel political exist now on the map Parliamentary failure to submit anything to the citizens and a commitment to programs election that they gave, what that this map will determine the electoral system for the election law, which witness the conflict existing between the political blocs to modify it. At this talk, A member of the State of Law Coalition MP / National Alliance / Abdul Ilah Naieli, that there is a political blocs in the current parliament Lai fact have the same weight and presence session next parliamentary, because it did not provide something for their constituents. He said Naieli in a statement (of the Agency news): The next parliamentary elections are very important, and that competition present between the political blocs on the law, evidence of this, explaining: that the existence of the political blocs in the next session, the electoral system, which will acknowledge that there are those who want to return to the law Previous and others are demanding the adoption of Saint Lego or Hundt. pointed out that, political blocs has the effect of street Iraq and taking its real-through provided by them and the implementation of the promises of the election, adding: There are blocks post in the House of Representatives, but you are obstructive to provide services did not provide something of the street and not be have a session coming, or do not have the same seats current and compete the rest of the blocks within the Council. Meanwhile, the MP / coalition in Iraq Free / Zuhair al-Araji, acknowledged that the coming stage will witness change بالخارطة parliamentary, because voters have lost confidence in a number of political blocs current , due to the conversion in the public interest for their personal interests. They said in a statement (of the Agency news): The current conflict of the political blocs to the election law come to in order to determine their electoral, because the electoral system is limited by the political map for the next phase, Maita example is the adoption of a law St Lego for provincial councils, which is the political map of the local governments and make Seen for outside powers Almanmana within the map. said: Either the political forces degrading want to stay on the dominance current council, and this also relates to the will of the voter and the election, pointing out that there is a reluctance to go to the ballot boxes and not accepting a number of the political blocs for being not implemented what it promised its voters. while, emphasized the leadership of the Kurdistan Alliance MP / coalition blocs Kurdistan / Ashwaq dry, that the political change to the next stage depends on the election law, which Saadelh House of Representatives. said dry in a statement (of the Agency news News): The election law of laws very important for the political process, and on the basis of which is determined by the size of each block in the elections, adding: that the adoption of this law is not as easy will be the Kurdistan victim again in approval as was the previous law. was House Speaker Osama Najafi, has announced the failure of the political blocs to an agreement which can pass the election law, confirming the decision includes notice of the Election Commission of the need to take the necessary technical measures to conduct, including the voter registration update later than 30/04/2014. noted that the current session ends in March of next year The parliamentary elections will be held after that date as being in Parliament is currently discussing the parliamentary election law amid accusations of some blocks of seeking to adopt the closed list, with variations on the mechanism of the distribution of electoral votes. / End