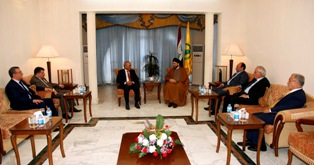 Baghdad (newsletter).The head of the Iraqi MP Salman Al-jumaili list and gathering are United spokesman dhafir Al-Ani, supported the initiative of the President of the Islamic Supreme Council of Iraq Ammar al-Hakim, in a national meeting and issued a statement to reassure the Iraqi people.

This was announced during the visit of the delegations to the Office of Mr. Al-Hakim in Baghdad on Monday.

According to a statement by the Office of Hakim received (News Agency) a copy of it: that Al-jumaili said the interaction of delegations with the initiative, pointing out that the Iraqis are capable of achieving peace and national harmony, usher her considered for new build in Iraq.

The statement said Al-Hakim, reiterated the commitment to national constants and appeasement in order to reach a solution to the problems plaguing the country.

Hakim, stressed the need to accelerate the national meeting was held in preparation for the zero the crises and problems between the political parties, also gave an explanation of the initiative to collect all political parties as well as their dimensions and their reflection on the general situation in the country.

The statement said: the two sides expressed concern over the deplorable security incidents involving the cities of the country, especially Baghdad over the past few days, has also been discussed legislation required in the next chapter and the next are local governments in the provinces.

Mr. Ammar al-Hakim called on the anniversary of the birth of Imam Ali (a.s) leaders of political blocs and the Shiite and the Sunni endowments for a symbolic meeting and issued a statement to reassure the Iraqi people