Economic center: invest part of the reserves of the Central Bank in local projects is a major economic risk

Economic center: invest part of the reserves of the Central Bank in local projects is a major economic risk 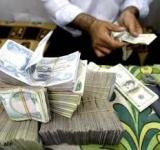 Baghdad (news) .. Warned Prime Media Center Economic Dergham Mohammed Ali, invest part of the reserves, the central bank of foreign currency in local projects within the country, because it is the risk of a major on the economic situation in the country. said Mohammed Ali (of the Agency news): The foreign reserves of the currency at the Central Bank is an asset for an emergency on the one hand and also cover the local currency on the other and cover longer reliable international and this is what makes maintaining and development necessary. confirmed on: not to use it only when absolutely necessary, ie to lend to the government at a fiscal deficit of salt in the state budget finances. added: can Investment parts of it within investment portfolios are almost guaranteed with central banks, European, either incorporated in the local projects are longer risk a major economic fact that this process is not the prerogative of the Central Bank of Iraq. pointed to: that the returns on investment in European banks is to develop the reserves and not to domestic spending within budgets except in cases necessary. / End / 8.’s. m /