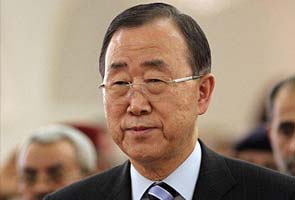 Baghdad: UN chief Ban Ki-moon arrived in Baghdad on Thursday for talks with  Iraqi leaders, state television said,  after a visit to Kuwait in which he called for a new era in relations between  the two countries.
After his  arrival, the UN secretary general went  into a meeting with Iraqi Foreign Minister Hoshyar Zebari, said Iraqiya TV,  without providing further details.
There are various outstanding issues  between Iraq and Kuwait stemming from Iraq’s 1990 invasion of its neighbour to  the south. Baghdad currently pays five per cent of its oil  and gas revenue into a special United Nations fund  that pays compensation to Kuwait.
Ban said in Kuwait on Wednesday that he is “committed to normalisation and to  ensuring that Iraq fulfils all of its outstanding international  obligations regarding Kuwait as the Security Council has mandated”.
“Tomorrow I will  visit Iraq and share the same message I bring today: it is time to usher in a  new era of cooperation between the two neighbours,” he said.
The visit  also comes at a time of high tensions between Iraq’s federal government and the  autonomous Kurdistan region, during which military reinforcements have been sent to disputed areas in  the country’s north.
Talks between federal and Kurdish security officials  aimed at easing the tensions broke down last week over Baghdad’s refusal to  scrap a new federal military command that covers disputed territory, Kurdistan  said.
The dispute over territory in northern Iraq is the biggest threat  to the country’s long-term stability, diplomats and officials say.