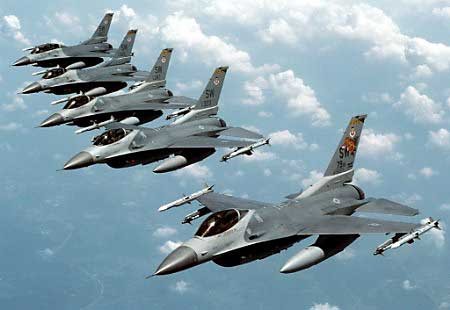 Revealed the Iraqi Air Force for monitoring devices recording of Israeli-made information within U.S. F16 fighter jets, part of the deal signed between Iraq and the United States on the purchase of these aircraft.

The second channel in the Israeli television official said that “the leadership of the Iraqi air force, and through officers pilots where, sent a letter to the company [Lockheed Martin] U.S. manufacturer of the F-16, because there are devices Israeli-made aircraft mentioned, came in the letter that U.S. fighter planes from Trim mentioned, in the ranks of the Egyptian Air Force and Turkish and Omani and Iraqi containing devices record information Israeli-made. ”

He added that “the reason to expose this is aircraft deal of this kind Iraqi government has purchased recently from the United States, where he discovered the Iraqi Air Force, and a device of the type [TEAC] your registration information, during the flight the plane in the air produced by the company [RADA Israeli Aerospace Industries. ”

The official Israeli television that “the U.S. company did not comment on the message of the Iraqi air force to it if its response to replace the Israeli information recording device made another U.S. costing vast sums to Achtarat silence and ignore the message of Iraq.”

Iraq has signed a contract with the United States over the past years to buy military aircraft warfare type [F16] in his quest to build defenses and air military capabilities, especially after the U.S. withdrawal, as revealed Chairman of the Commission on Security and Defense parliamentary Iskandar and berries in a press statement on 30 April last , said Iraq will receive the early 2014 down payment of 24 F-16 fighter jets within 36 aircraft had been ordered from the United States.