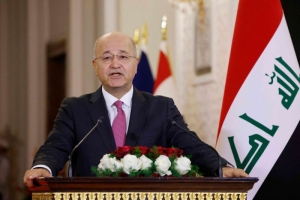 BAGHDAD – Iraqi President Barham Salih warned, on Saturday evening, of a state of political impasse, calling on the political forces to hold an effective dialogue to get out of the crisis of electing the president and forming the new government, while the leader of the Shiite movement Muqtada al-Sadr sent a message to his opponents from the coordinating framework that there is no return to a “mixture.” Al-Attar” regarding the formation of the next government.

This came after the failure of the Iraqi parliament to gather 220 deputies from the audience to vote on the President of the Republic, after 126 deputies responded to the boycott call from the coordination framework, the Shiite alliance that includes the bloc of former Prime Minister Nuri al-Maliki and the Al-Fateh bloc, which includes factions loyal to Iran.

Saleh said, “The lack of national understandings and the failure of the parliament session to complete the constitutional entitlements on time is unfortunate and worrying, more than 5 months after the early elections.”

The Iraqi president stressed that “the continuation of the political impasse amid the grave challenges facing the country has become unacceptable.”

He added that “holding early elections was not a goal in itself, but rather a means of reform, ensuring political and social stability, improving the general conditions in the country, and responding to the demands of the Iraqis, and that the new Parliament, which emerged from the elections, bears an exceptional responsibility as it came after a popular movement and a broad national consensus.” He calls for correcting the tracks, and for ending the political crises that have persisted in the country, not perpetuating them.”

He pointed out that “the political forces today are facing a decisive national test, and that the difficult circumstances that have passed through the country and the current delicate circumstance impose on everyone a historical responsibility and exceptional work to get out of the current crisis, in the spirit of patriotism and solidarity, and to start meeting the national benefits by forming a capable and effective government that protects the interests of the country.” It enhances its sovereignty and independence, and works to meet the aspirations of Iraqis.”

President Salih called on all Iraqi political parties to “a serious and effective dialogue to get out of the current crisis without complacency or delay, and to give priority to the interests of Iraq and the Iraqis, and to take into account regional conditions, international changes and internal challenges before us, especially the dangerous economic conditions, which call for keenness to strengthen the home front in Iraq.” The way out of the current crisis in a way that meets the aspirations of the citizens, who are waiting with anticipation and impatience for the formation of authorities expressing their will and aspirations for a decent and free life.

And earlier on Saturday, the presidency of the Iraqi parliament postponed the session to choose the president until next Wednesday, after it was boycotted by Muqtada al-Sadr’s political opponents who are part of the “coordinating framework” that includes Shiite forces and factions backed by Iran, in addition to the Patriotic Union of Kurdistan, which again nominated the current president, Barham. Fit for a second term.

Officially, 202 deputies participated in the session, especially from the coalition led by the Sadrist movement, that is, 18 deputies less than the quorum of 220 necessary to start the election process.

Despite the parliament’s failure to elect a president, the leader of the Sadrist movement, Muqtada al-Sadr, whose list topped the last parliamentary elections, Saturday, expressed his refusal to return to the quotas, which he described as “Al-Attar’s mixture” regarding the formation of the next government, stressing his efforts to form a national majority government.

He added, “Your appointment will be renewed next Wednesday (the next session to elect the president) with those who will join again to remove corruption, dependency and consensus,” reiterating his efforts to form a national majority government.

Al-Sadr continued, “We will not return to the Al-Attar mixture. Today, we have proven and proved that there is no place for quotas. It was the most beautiful Iraqi mosaic, neither eastern (Iran) nor western (America).”

The political path is often complex and long in Iraq due to severe divisions, multiple crises and the influence of powerful armed groups.

There are forty candidates for the presidency, but the actual competition is limited to two figures representing the two most prominent Kurdish parties: the current president since 2018, Barham Salih, the candidate of the Patriotic Union of Kurdistan, and Reber Ahmed, the candidate of the Kurdistan Democratic Party. It is assumed that the candidate gets the votes of two-thirds of the House of Representatives to win.

Since the country’s first multiple elections in 2005 and organized after the US invasion that led to the fall of Saddam Hussein’s regime in 2003, the position of President of the Republic has traditionally been held by the Kurds, while the Shiites hold the prime ministership, and the Sunnis the House of Representatives. The Patriotic Union of Kurdistan traditionally holds the presidency of the republic, in exchange for the Kurdistan Democratic Party taking over the presidency of the Kurdistan region, according to an agreement between the two parties.