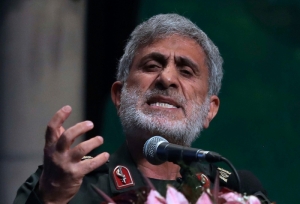 TEHRAN – A senior Iranian official threatened during a visit to Baghdad a ground military operation in northern Iraq if the Iraqi army did not fortify the common border against Kurdish opposition groups, according to the Associated Press, citing a number of Iraqi and Kurdish officials.

The agency said that such an operation, if implemented, would be “unprecedented” in Iraq, and would exacerbate the regional repercussions in light of the turmoil in Iran, which it considers an external plot, without providing evidence of that.

The agency revealed that the Iranian threat was conveyed by the commander of the Quds Force of the Revolutionary Guards, Ismail Qaani, who arrived in Baghdad last Monday on an unannounced visit that lasted for two days, and came one day after an Iranian missile attack targeted an opposition base in Erbil, killing three people.

Qaani’s demands were twofold: disarming the Kurdish groups opposed to Iran in northern Iraq, and fortifying the borders to prevent infiltration.

Two Shiite politicians, two militia officials and a senior Kurdish official confirmed to the Associated Press that Qaani said, “If Baghdad does not meet the demands, Iran will launch a military campaign with ground forces and continue bombing opposition bases.”

Iran claims that the Kurdish opposition in northern Iraq incites anti-government protests in Iran, and accuses them of smuggling weapons into the country.

The agency’s report indicated that the Iranian threat “puts Baghdad in a dilemma,” as this is the first time that Iranian officials have openly threatened a ground military operation.

The protests that erupted in Iran after the death of a young Iranian Kurdish woman, Mahsa Amini, 22, are entering their second month. The authorities arrested thousands of protesters and killed hundreds of them, while Tehran blames foreign interference for instigating the protests.

Tehran launched more than once missile attacks targeting what it says are Kurdish opposition bases inside Iraq, killing at least 10 people and injuring many more.

The Kurdish opposition parties deny that they smuggled weapons to arm the protesters, and their participation in the protests does not go beyond moral support and assistance in providing medical care to the injured demonstrators coming from Iran.

“He was aware of Tehran’s demands,” said Soran Nouri, a leader in the Kurdistan Democratic Party in Iran. “We have never smuggled weapons to and from any country.”

The Baghdad government did not take any decisive action to stop the attacks launched by the Turks and Iranians on the region.

And the new Iraqi Prime Minister, Muhammad Shia’a Al-Sudani, said during a meeting with journalists last Saturday in Baghdad in this regard that his government “will take all measures in accordance with international legal contexts.”

“We reject any aggression from any country, whether it is Iran or Turkey,” he added.

Some Kurdish groups have been engaged in a low-intensity conflict with Tehran since the Iranian Islamic Revolution of 1979, leading many members to seek political exile in neighboring Iraq where they set up bases.

Opposition members in Iraq openly carry medium-sized weapons on bases, saying they are for self-defence.

In March, Iran claimed responsibility for a missile barrage that landed near the US Consulate in Erbil. Iran said while it was targeting an Israeli “strategic centre”, Kurdish officials denied the existence of such a center.

Iran’s foreign minister, Hossein Amirabadollahian, echoed the allegations in a tweet, accusing Israel and “some Western politicians” of planning “civil war, destruction and disintegration of Iran”.

“The Iranian regime is paranoid,” said Randa Selim, director of programs at the Middle East Institute. “They firmly believe that Mossad is using Kurdish lands and Kurdish opposition groups to send weapons (and) fighters to Kurdish areas in Iran,” she added.

She emphasized that a combing operation in northern Iraq would support the regime’s public narrative that external forces are stirring unrest and would address the ongoing dispute between Iran and the semi-autonomous Iraqi Kurdish region over the groups’ activities in its territory.