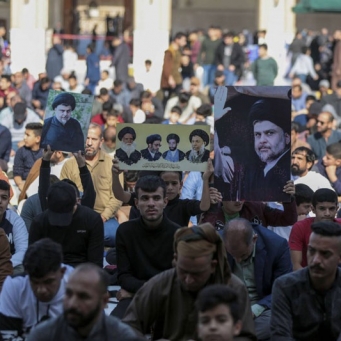 The Sadrist movement is preparing to return to the political scene in Iraq after a relatively long period of retreat that sparked widespread confusion about the future of the movement, which is led by the Shiite cleric Muqtada al-Sadr. And the movement took the establishment of unified prayers in the capital, Baghdad, and in the rest of the other provinces (except for Basra) next Friday as an entry point to prepare for this return, which would worry its opponents from the coordination framework, especially the leader of the State of Law coalition, Nuri al-Maliki.

The Sadrist movement, which won the legislative elections that took place in October 2021, suddenly withdrew from the political process last September, after months of tensions and a struggle of wills between it and the coordination framework that constitutes the political umbrella for the pro-Iranian forces.

This withdrawal enabled the framework to take control and form a state government headed by Muhammad Shia’ al-Sudani. The framework forces are preparing to strengthen their position by working on a new electoral law alternative to the current law, which these forces hold responsible for their significant decline in the legislative elections.

Observers believe that the Sadrist movement’s decision to return to the scene at this time is not devoid of political calculations, especially as it coincides with the approaching 100 days since the formation of the Sudanese government, and in conjunction with a financial crisis as a result of the fluctuation of the price of the local currency against the dollar.

Observers say that among the other motives that made the movement move again is a process that is taking place to strike any presence of the movement in the joints of the executive authority, which sources say is motivated by the leader of the State of Law coalition.

They explain that al-Sadr believes that his continuation of the policy of retreat will cost him a lot politically and even popularly, and therefore the movement has become necessary to defend the existence and continuity of the movement, noting that choosing to return by organizing a unified Friday is an indication from him that this return will not be through the gate of politics, but rather through street.

The movement published a document in which it affirmed that “on the occasion of the anniversary of the manifest conquest and the tongue that speaks in the name of God, His Messenger, and the Commander of the Faithful, the blessed Friday prayer will be held throughout Iraq, which was brought out from darkness into light, by the guardian of the Emir of Muslims, the happy martyr Muhammad al-Sadr (father of Muqtada al-Sadr) Which coincided with the blessed state of our Lady Al-Zahraa (peace be upon her).

Observers believe that the call for unified prayer paves the way for a stronger movement in the street in the future, especially since the Sadrist movement has a great ability to move the street and attract supporters in previous stations.

Observers point out that the political arena appears to be on the verge of hot developments, as al-Sadr will not hesitate to make displays of force in the street, and these displays of messages will not be directed only to local opponents, but also to Iran, for which al-Sadr will not forget that it was the main reason for forcing him to give up. Abandoning his electoral achievement, and his exit from the political process through the small door.

Thumbnail
It is expected that al-Sadr will take a more severe course in the face of Iranian interference in Iraq in the coming period, which was noticed by the emphasis of leaders in the movement on the “Arab and Gulf incubator” of Iraq.

A leader in the Sadrist movement criticized Iran’s reaction to the designation of the Arab Gulf on Wednesday, and the leader, Issam Hussein, said that “there is no justification for Iran summoning the Iraqi ambassador to Tehran,” considering that “this matter is considered a green light for Iran’s supporters and loyalists in Iraq to launch campaigns against the designation.” The Arabian Gulf, in the 25th Gulf Championship held in Basra Governorate.

Earlier, Iran summoned the Iraqi ambassador to protest the use of the term “Arabian Gulf” when Baghdad hosted the twenty-fifth edition of the Gulf Cup (“Gulf 25”).

The tournament, which started on Friday in the city of Basra, is held once every two years under the official name of the “Arabian Gulf Cup”, and the countries of the Gulf Cooperation Council (Saudi Arabia, the Emirates, Kuwait, Qatar, Bahrain and the Sultanate of Oman) participate in it, in addition to Yemen and Iraq, which hosts it for the first time. The first since its inception in 1979.

The leader of the Sadrist movement said, “Iran is very disturbed by the issue of integration between the Iraqi people and the peoples of the Arab Gulf states, as it does not want this rapprochement for fear of an increase in tourist trips in the future and the development of matters into economic and investment issues, and for this it is launching attacks and escalating on a daily basis against this matter.” By objecting to naming the Arabian Gulf.”

And the leader of the Sadrist movement considered that “Iran has been saying for forty years that it is an Islamic republic, but the objection today to naming the Arab Gulf instead of the Persian Gulf indicates that it is a national republic, not an Islamic one.”

The Iranian reaction to the use of the term “Arabian Gulf” constituted a great embarrassment to the coordinating framework, which tried to hold the stick in the middle by saying that it was “neither Arab nor Persian,” but rather the “Gulf of Basra,” in an evocation of a name mentioned by historians.