Al-Sadr refused to participate in the new Iraqi government, handing over to the sidelines

Al-Sadr refused to participate in the new Iraqi government, handing over to the sidelines 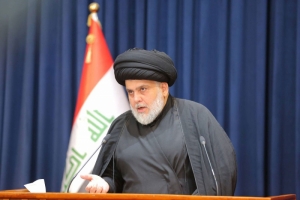 Baghdad – Iraqi sources described the Sadrist movement’s refusal to participate in the new government by acknowledging its marginal status and accepting its presence outside the political game in Iraq, while the Iraqi Prime Minister-designate Muhammad Shia Al-Sudani began on Saturday to hold consultations with the Iraqi parliament blocs regarding the program of the next government and the cabinet formation.

And political circles said that Nuri al-Maliki, the former Iraqi Prime Minister and the influential figure in the pro-Iranian coordination framework, succeeded in outperforming the leader of the Sadrist movement Muqtada al-Sadr when he managed, after maneuvers, to return the parliament to hold its sessions, elect a new Iraqi president, assign the prime minister who was nominated by the framework in advance, and restore control. In the entire political process, Al-Sadr found himself completely out of the game due to his failure to impose his allegiance on the political scene.

Muhammad Salih Al-Iraqi: We will not participate in a coalition government of dependence and militia proven

The circles added that the combination that al-Maliki succeeded in reaching is considered a victory over al-Sadr in the first place, especially since the leader of the State of Law coalition benefited from the resignation of Sadrist deputies to build new alliances, using those who were on al-Sadr’s side and turned them in his favour.

A year after the early legislative elections, the Iraqi parliament elected on Thursday the compromise candidate, Abdul Latif Rashid (78 years), as President of the Republic, who in turn assigned Muhammad Shia Al-Sudani (52 years) to form a new government for the country.

Al-Sudani was nominated for this position by the coordination framework, which includes several blocs, including the State of Law led by former Prime Minister Nuri al-Maliki and the Al-Fateh bloc representing the pro-Iranian Popular Mobilization factions.

The framework, which has the largest number of deputies in Parliament, seeks to speed up the political process after a year of paralysis and division. But the Sadrist movement, whose leader has the ability to mobilize tens of thousands of supporters with one tweet, confirmed on Saturday its position rejecting this candidate and the next government.

In a statement posted on social media, Saleh spoke of the existence of “undisputed efforts to satisfy the current and silence the voice of the nation,” referring to media statements and experts who talk about the possibility of proposing ministerial positions to the Sadrist movement.

“In the midst of forming a coalition government of proven militia dependency that did not and will not meet the people’s ambition (…) after efforts to form a national majority government failed (…) we stress our categorical, clear and frank rejection of the participation of any of our affiliates (…) in this government formation that he heads,” Saleh said. The current candidate or other old or affiliated faces of the corrupt and their authority.”

He added, “Anyone who participates in their ministries with them unjustly, aggression and disobedience for any reason does not represent us at all, but we are acquitted of him until the Day of Judgment and he is considered immediately expelled from us (the Al-Sadr family).”

The nomination of the coordination framework for Muhammad Shia Al-Sudani in the summer constituted a spark that ignited tension between the framework and the Sadrist movement, whose supporters staged a sit-in in front of Parliament for about a month.

The tension reached its peak on the 29th of August, when 30 of his supporters were killed in clashes inside the Green Zone with forces from the army and the Popular Mobilization Forces, which are Shiite armed factions loyal to Iran and affiliated with the state apparatus.

In a speech Thursday night, Al-Sudani expressed his “full readiness to cooperate with all political forces and societal components, whether represented in the House of Representatives or present in the national space.”

At the heart of the crisis during the past months was the dispute between the two major Shiite camps: the Sadrist movement on the one hand, and the coordination framework that includes several blocs, including the State of Law led by former Prime Minister Nuri al-Maliki and the Fatah bloc representing the Popular Mobilization factions.

The new taxpayer has 30 days from the day he was assigned to present the new government formation. The sources suggested that the formation of the next government will include between 25 and 30 ministerial portfolios, the majority of which will be from the Shiite coordinating framework forces, which has the majority in the Iraqi parliament.

The sources pointed out that the political forces are considering naming three deputies to the President of the Republic, noting that the Iraqi Prime Minister-designate will present the formation of the government within two weeks or early next month, and it will be accepted by the Iraqi parliament.

The sources suggested that the ministerial portfolios of the sovereign ministries (foreign, oil, finance, defense and interior) would be shared exclusively between the Shiite, Kurdish and Sunni forces that hold the majority in parliament.