The last solution.. UN-sponsored dialogue before imposing guardianship on Iraq

The last solution.. UN-sponsored dialogue before imposing guardianship on Iraq 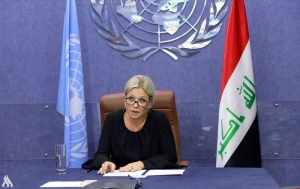 Several concerns were raised recently by the UN envoy to Iraq, Jenin Plaschaert, in the sense that it constitutes a prelude to imposing international trusteeship on the country, but the real trend goes to the announcement of a third dialogue initiative under the supervision of the United Nations to present proposals for solutions to get out of the crisis.

Baghdad – The UN envoy to Iraq, Jenin Plasschaert, indicated during her briefing to the Security Council that there are indeed solutions to the political crisis in the country, but they lack the will among the conflicting political parties.

Muqtada al-Sadr, the leader of the Sadrist movement, was quick to announce his support for the dialogue, although he set conditions for that, such as that the dialogue be public and take measures to prosecute the corrupt.

The “coordinating framework” groups also announced their reversal of resorting to the street and their acceptance of returning to the dialogue table. Although it rejected the preconditions for dialogue, it affirmed at the same time that there is no government without the participation of the “Sadr movement.” This constitutes an important first indication of reversing the imposition of a government headed by Muhammad Shiaa al-Sudani, with or without al-Sadr’s consent, as it had intended to do.

What the parties can accept
There is continuous coordination between Prime Minister Mustafa Al-Kazemi and Plasschaert about what the parties to the conflict can accept, and what the United Nations can impose a settlement on.

The current ground indicates that there is no way for consensus between the two main parties to the crisis if the matter is left to them alone. The coordination framework groups insist on resuming parliament sessions, electing a president and a prime minister with full powers, and amending the election law. While the Sadrist movement insists on dissolving parliament, keeping the election law as it is, and keeping the Al-Kazemi government for nine months, and amending the Federal Court Law to be far from the quota system under which the court was formed.

However, this is not necessarily the final picture of the situation. The issues of contention indicate that there are points on which settlements can be found.

The main point of consensus is the holding of new early elections. Which means that the need is limited to drawing a road map to it.

Seven tracks
Observers say that by reading the different positions, a possible settlement schedule could take the following tracks: First, will there be a government with full powers or a caretaker government? The alternative is a mini-government that will continue to operate for one year, not extendable, and its main function is to conduct the main public affairs, including approving the budget for this year, and preparing for holding new general elections in October of next year.

The second track raises the question about a sectarian quota government or a government of independents? Here, the possible alternative is an independent prime minister, similar to Al-Kazemi, who will head a government of national competencies, provided that each of the main parties nominate candidates for what was his share, leaving the other parties to cross out the unacceptable ones.

As for the third path, it could be the resumption of parliament’s work or its dissolution. The alternative is for Parliament to resume its work, to extend the work of the President of the Republic, and to elect a new prime minister, with the possibility of Al-Kazemi remaining in his position, as long as the duration of the government’s work will not exceed one year, which makes the difference over the name of the President of the Republic and the Prime Minister redundant. But the matter can be left to the consensus of the parties involved. This means that the nomination of Muhammad Shia Al-Sudani will be withdrawn to the account of another independent figure. While the Kurds agree on an alternative candidate for President Barham Salih.

A fourth path is the survival or change of the electoral law, and the alternative is to carry out reforms to the law in some non-key places, especially since the current law was one of the demands of the October demonstrations, which makes its abolition, change or return to the previous law the subject of new protests.

As for the fifth track, it is necessary to change the Federal Court law or propose its survival. The alternative is for the current law to remain until after the next elections, in order not to increase the burdens on an interim parliament. In the sixth track, the “majority” must be redefined, and the current ambiguity removed from the definition, so that it is agreed that the “majority” is a “national majority.” It means what any party can collect from the alliances that get a majority of half plus one. It is a path that the coordination framework groups accepted when they decided to establish a “state administration coalition” by excluding the Sadrist movement from it. This effectively cancels out the principle of the “consensual government” that the coordination framework groups have been adhering to, and which is based on the idea that the only “majority” qualified to lead the government is the sectarian majority.

The planned dialogue in its third round will not necessarily be public, as Al-Sadr demands, while Al-Kazemi and Blackshart want it as a practical framework for settlements.

Finally, the seventh path embodied in the path to combating corruption comes. The alternative is to define a general framework for parliamentary oversight over the areas of government spending, contracts and projects, subject them to investigations by the Independent Integrity Commission, and restructure this body to ensure the integrity of its membership from the influence and influence of parties. This implicitly means agreeing on the basis, standards and monitoring tools, and postponing the discussion of prosecutions and trials, which in the current circumstances may mean attempts to settle political scores between the conflicting parties.

Observers say that the envoy of the Secretary-General of the United Nations has a clear vision of the broad lines that can be presented to the planned dialogue. It also knows very well the size of the distance separating the conflicting parties and the state of mistrust between them, and considers that the conflict can take a positive path if it is laid on foundations that support political and legal reforms, and if it is possible to reduce the possibilities of armed conflict that threaten to sabotage all paths .

A state of mistrust
The prevailing perception is that the continuation of the current situation is no longer possible. This was confirmed by Plasschaert in her briefing to the Security Council, saying that “the disappointment of the people has reached the sky. Many Iraqis have lost faith in the ability of Iraq’s political class to act for the benefit of the country and its people. Continued failure to address this loss of confidence will only exacerbate Iraq’s problems.

Plasschaert showed a clear understanding of the main problem that led to the status quo by saying that “the political system and system of governance in Iraq ignore the needs of the Iraqi people. The rampant corruption is a major root cause of dysfunction in Iraq. No leader can claim to be protected from it.”

And the planned dialogue in its third round will not necessarily be public, as Al-Sadr demands, for fear that the round will turn into a platform for speeches and accusations, while Al-Kazemi and Blackshart want it as a practical framework to reach settlements about what can be done to set an agreed roadmap to reach new elections.

As for imposing guardianship over Iraq, it is still a possible possibility, but it is conditioned by three concomitant variables; First, the dialogue failed again. Secondly, the outbreak of armed confrontations between the conflicting parties. And third, the halt in oil exports.