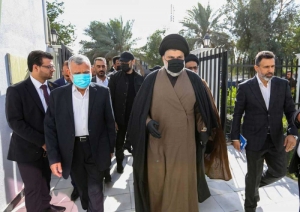 Baghdad – Iraqi political circles say that passing a bill to criminalize normalization with Israel in the Iraqi parliament is not without internal political calculations.

And the circles pointed out that this step is also an attempt by the leader of the Sadrist movement, Muqtada al-Sadr, to achieve marketing, after he failed to achieve any of the bets placed on him as the winner in the legislative elections, whether with regard to resolving the internal crisis that the country has been witnessing for nearly eight months, or in Passing bills that ease the impact of the economic crisis on the citizen, as is the case with the emergency food security bill.

The Sadrist movement pushed a bill criminalizing normalization with Israel to Parliament about a month ago, after accusations leveled against it repeatedly, regardless of suspicions of a relationship between its allies in the “Save a Homeland” coalition (the Kurdistan Democratic Party and the Sunni Sovereignty Alliance) and Israel.

Iran has repeatedly accused the leaders of the Kurdistan region in northern Iraq of dealing with Israel to harm it, and this coincided with the hints of some tribal figures who recently returned to the Iraqi scene that the Sovereignty Coalition, especially its leader Muhammad al-Halbousi, is implementing an Israeli agenda in the heart of Sunni geography in Iraq.

The law prohibits the establishment of diplomatic, political, military or economic relations or any kind of relations

On Thursday, members of the Iraqi parliament (parliament) voted in favor of the criminalization project, and the parliament’s media department said, in a statement, that “the parliament voted unanimously on the proposal (without specifying their number).

The leader of the Sadrist movement quickly published a tweet on the social networking site Twitter, in which he called on the Iraqi people to take to the streets to celebrate the vote on the proposed law, which he described as a “great achievement.”

Al-Sadr thanked the MPs and his allies, saying, “I cannot fail to thank everyone who strived for this, especially the Legal Committee and the Alliance to Save a Homeland, and thank you in advance to everyone who voted in favor of this law, and thank you to the Speaker and his two deputies for their efforts in this,” addressing the MPs by saying: Iraq at your disposal.”

The first deputy speaker of the House of Representatives, Hakim al-Zamili, who in turn belongs to the Sadrist movement, issued a statement saying that “this law, which was unanimously voted by the voters, represents a true reflection of the will of the people, a brave national decision, and a position that is the first of its kind in the world in terms of criminalizing the relationship with the entity.” Zionism, calling on Arab and Islamic parliaments to issue similar legislation that meets the aspirations of their peoples.

The political circles see that al-Sadr’s call for people to go out to celebrate is not devoid of populism and is an attempt to delude people into the importance of this achievement, although the Iraqi street is currently concerned with the issue of criminalizing normalization with Israel, as there are no existing relations with the Hebrew state, and the priorities of the Iraqi citizen The simple is to ease the burdens of the economic crisis in which he is floundering, and there is no answer.

These circles point out that Iran is the only party that will actually celebrate this “Sadrist achievement”, as this decision will increase its current hostility towards the Kurdistan region.

The circles consider that al-Sadr, who has always tried to delude many that he is not subject to any pressure or takes into account Iranian calculations, somehow also wanted to convey a message to Tehran that what the forces loyal to it have failed to achieve over the past years, he has succeeded in achieving, and that Iran should not bet Too much for those forces to preserve their interests at a time when he is able to secure them.

The new law provides for the imposition of penalties, including life or temporary imprisonment, and aims, according to its first article, to “prevent the establishment of diplomatic, political, military, economic, cultural or any other form of relations with the occupying Zionist entity.”

Article 201 of the Iraqi Penal Code stipulates that anyone who promotes the principles of Zionism, including Freemasonry, or affiliates with any of its institutions, or helps them financially or morally, or works in any way to achieve its goals, shall be punished with death.

Those who reject normalization of relations with Israel say that it still occupies Arab lands in Palestine, Syria and Lebanon since 1967 and rejects the establishment of an independent Palestinian state with East Jerusalem as its capital.