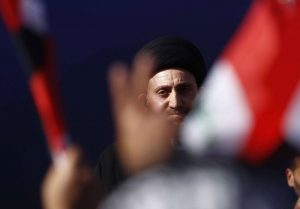 BAGHDAD – The emergency changes in the Iraqi scene have restored momentum to the initiative put forward earlier by the head of the Al-Hikma Movement, Ammar Al-Hakim, to settle the political crisis that has afflicted Iraq since last October.

This comes at a time when Iran is intensifying its pressure to ensure a settlement in which the forces loyal to it represented in the coordination framework will participate.

Observers believe that the sudden step of the coordination framework, coordinating the return of a number of Sunni symbols after being excluded for years, has caused a shock in the Iraqi arena, and generated great pressure on the Alliance to Save a Homeland, especially the Sunni Sovereignty Coalition, which finds itself compelled to review its political accounts.

Observers point out that the recent visit of the leader of the Sovereignty Alliance and Parliament Speaker Muhammad al-Halbousi to Iran is one of the indicators of the possibility of the disintegration of the Alliance to Save a Nation, as al-Halbousi realizes that staying in this alliance and antagonizing the forces of the coordination framework will not be in his favor.

Hassan Danai Far: Al-Halbousi’s visit falls within the context of efforts to get out of the current impasse

Observers say that the Sadrist movement, which has so far been silent, refusing to comment on the return of some Sunni symbols, is in the process of evaluating the impact of this return on the cohesion of the Save a Homeland Alliance, which it leads, and that this movement will find no choice but to return and resume negotiations with the framework in the event that it is proven to be its ally. Sunni tends to reconsider its current position.

Observers make it clear that Al-Sadr may find in the initiative proposed by Ammar Al-Hakim a ladder to descend from the tree he climbed, through which he will save face, noting that the latter is not likely to accept the initiative put forward by the coordination framework before the month of Ramadan because he will consider it as a declaration of defeat. Although the two initiatives are similar in terms of content.

In his initiative, the head of the Wisdom Movement called on the political parties to sit at the dialogue table and discuss various solutions and treatments without preconditions or restrictions, naming the largest parliamentary bloc by the largest social component and resolving the issue of the three presidencies (the republic, the government, and parliament) through understandings.

Al-Hakim’s initiative touched on the importance of formulating the service and political program for the next government, setting a realistic time limit for its implementation, and determining criteria for selecting the new ministerial team, urging “the distribution of roles. And his decision, and those who do not wish to participate, take the House of Representatives as a basis for his constructive opposition.”

Al-Hakim, who suffered a severe electoral loss but is still politically influential, called on what he considered “the forces of the majority” to “pledge to provide a safe cover for the opposition,” calling on the opposition, in turn, not to “disrupt parliament sessions and actively attend in it and allow the majority to complete the constitutional dues.” .

He urged “the adoption of government reform as a material for political competition in performance and discourse, and for every political entity and every coalition to present its programs and its economic, cultural, political, development and security vision before the media.”

Observers believe that Al-Hakim’s initiative may constitute a way out of the political settlement in Iraq, noting that the continuation of the political impasse poses a major threat that the Iraqi forces cannot bear.

They point out that this initiative will not find opposition or reservations from the regional and international forces influencing the Iraqi scene, as it will ensure the maintenance of the political balance that has existed for years.

The former Iranian ambassador to Baghdad, Hassan Danaeifar, said Thursday that his country is working to help Iraq get out of the political impasse that hinders the formation of the next federal government.

“I have visited Iraq several times and made a trip to Erbil two weeks ago,” he said in an interview with the Iranian “ILNA” news agency.

The Iranian official had met with the leader of the Kurdistan Democratic Party, Massoud Barzani, the President of the Region, Nechirvan Barzani, and Prime Minister Masrour Barzani on the tenth of this April.

And Danai-Far added during the interview with “ILNA”, saying that Tehran can help the Iraqi political currents to get out of the political impasse, and that Al-Halbousi’s visit can be evaluated in this context.

And Iranian media recently revealed that Tehran entrusted Ambassador Hassan Danaei who fled the responsibility for the Iraqi file, after Ambassador Iraj Masjedi was unable to achieve any breakthrough.

Observers believe that the coming period will be crucial for the political crisis in Iraq, with Tehran likely to intensify its pressure on the Shiite parties to end the current impasse.

And the leader of the State of Law coalition, Nuri al-Maliki, revealed recently that the month of June will be decisive for the political crisis.

Al-Maliki announced his rejection of the idea of ​​“extending Mustafa Al-Kazemi’s government for another half,” stressing that “Parliament does not have such authority, and if it happens, it means the death of Parliament and the constitution, so let us go to other early elections or another solution.”

The former Prime Minister suggested that “next June will be a crucial month for resolving the political crisis, according to the current developments.”