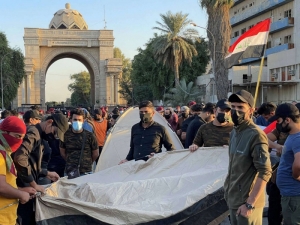 Iraqi cleric Muqtada al-Sadr seeks to translate his electoral victory into reality by taking the helm of the political process without a partner from the Shiite house. Observers say that all indications suggest that al-Sadr is still opposing Iran’s desire for a consensual government and insists on the choice of a majority government.

Baghdad – The Sadrist movement’s Friday preacher, Hussein al-Asadi, said that the Sadrist bloc seeks to establish a “national majority” government that enjoys independence and rejects the logic of dependency, in a situation that reflects the failure of Iranian moves so far to combine the coordination framework that includes the factions loyal to it, and the Sadrist movement, which is the leader in the results of the legislative elections. .

During the Friday prayer sermon in Sadr City, Al-Asadi considered that “the state in the modern sense is a political entity with a central government that maintains the legitimate use of force, and achieves development and advancement of the people at the economic, social and political levels.”

And in order for the state to be able to perform its basic functions, it must have several pillars: the first pillar is sovereignty, which means that the state is not subject to an authority higher than it from the inside or the outside, and the second pillar is that the political system in the state performs its function, which is the equitable distribution of rights, privileges, and resources on the society”.

Al-Asadi explained, “If the sovereignty of the state is under the influence of other countries and interference in the internal affairs, this will lead to confusion in the performance of its national role and will make the state in the winds of chaos and turmoil, and thus the incomplete sovereignty will lead to a major imbalance in the function of the political system, for example, the criteria The distribution of rights and resources on the basis of sect or race, which means the emergence of the muhassa system, which is an unjust system based on theft and corruption.”

Al-Asadi’s sermon and his repetition of the word “sovereignty” more than once reflected a position rejecting Iranian interference after the elections and Tehran’s pursuit of its agenda by forming a quota government that guarantees the militias loyal to it continuity of political power.

The Sadrist movement, led by Shiite cleric Muqtada al-Sadr, topped the preliminary results of the legislative elections that took place last October with 73 parliamentary seats, while the Sunni Progress Movement won 38 seats, and the independents won 38 seats, and the State of Law coalition achieved important results by obtaining 35 seats, and the party obtained The Kurdistan Democratic Party has 33 seats.

On the other hand, the Al-Fateh Alliance, the political umbrella for the pro-Iranian militias, suffered a severe defeat by obtaining 15 seats after it was second in the previous elections that took place in 2018.

The Al-Fateh Alliance is betting on diplomatic efforts to support it, Iran, to overcome the brunt of the defeat and remain on the scene. However, things are not going according to what it wants, in light of the Sadrist movement’s insistence that it be the main player regulating the political process.

Observers believe that the Sadrist movement appears today in a more powerful position at the internal level, especially after the High Elections Commission confirmed that the manual counting process matches the electronic counting in the appeals file, and the recent statements of the Supreme Judicial Council not to record legal evidence of fraud that occurred in the entitlement, as the factions allege. .

Observers point out that al-Sadr considers that the time has come to be the undisputed “maestro” of the political process, and is betting on persuading some Kurdish and Sunni forces to support him, such as the Sunni Advance Bloc and the Kurdistan Democratic Party, who had previously held preliminary meetings with him.

The duo is slow to walk with Al-Sadr, as they do not want to be in the face of the reactions of Iran and its loyal factions, and Tehran has previously warned both of the consequences of participating in isolating the factions loyal to it.

Observers say that the duo will find themselves, after the High Elections Commission announces the final results, which are expected to be very close to the initial results, forced to resolve their position regarding the alliance with al-Sadr, and this will mean pulling the rug out completely from Iran and its factions, pointing out that the matter remains It is also linked to Al-Sadr’s firmness in the face of Iranian pressure.

Hussein al-Asadi explained that “the country’s imperfect sovereignty and the quota system are both incompatible with the nature of the state, and are not in harmony with decent living, dignity and stability for the people, but rather in harmony with corruption, chaos, devastation and civilized setback,” noting that “what is consistent and consistent with the Iraqi people’s demand for decent living.” It is complete sovereignty and non-dependency on the East and West, and the establishment of an elected political system on the basis of national criteria, not sectarian and ethnic quotas.”

He pointed out that after the end of the elections and the appearance of the results with the victory of the Sadrist bloc, its quest to “establish a national majority government that enjoys its independence and non-subordination and takes upon itself the redistribution of rights and resources to the Iraqi people a fair distribution aimed at the advancement of construction, industry and agriculture and a struggle against poverty, ignorance and unemployment.”

He added, “Iraq today is on the cusp of a golden opportunity to achieve its stability and development. We hope that it will not be lost because of the agendas and trends that see politics as a prey on wealth and a seizing of rights and resources. We hope that the people will forget their environmental problems and stand in support of this national project.”

On Friday, thousands of followers of the losing factions gathered in the elections, and the demonstrators raised banners reading “We will restore the right to its people” and “Demonstrators to recover our votes that were stolen by forgers.”

The flags of the Popular Mobilization and banners of the Iraqi tribes and chants rejecting the election results were seen.

The wave of sit-ins by supporters of the losing parties and blocs in the parliamentary elections at the Green Zone gate entered its fourth week, and the demonstrators set up dozens of sit-in tents, which led to the blocking of a number of streets and the restriction of traffic in others.

It is feared that the loyal factions will drag the street towards the square of violence in order to confuse the cards, and this matter may lead Iraq to dangerous slides that afflict the rest of the country.

It is expected that the judicial body in the Independent High Electoral Commission in Iraq will complete the process of responding to the results of appeals and complaints in the presence of international and local observers, which included electoral centers in 15 Iraqi provinces.