Iraq is pressing to recover its looted money: its value is estimated at 300 billion dollars

Iraq is pressing to recover its looted money: its value is estimated at 300 billion dollars 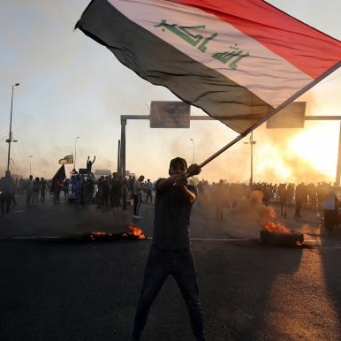 The Iraqi government continues its efforts to recover the looted and smuggled funds outside the country, despite its transformation into caretaker duties after the legislative elections were held on the tenth of this month, from which a new government is scheduled to emerge.

Officials and specialists estimate the money wasted and smuggled out of the country due to corruption operations at more than 300 billion dollars since 2003. Local media quoted informed sources as saying yesterday, Friday, that the amounts recovered since the formation of the investigation committee in corruption and major crimes cases last year until today exceeded 8.5 trillion dinars. Iraqi (equivalent to $5.7 billion), explaining that the accused are officials, businessmen and employees in various positions.

A senior government official confirmed to Al-Araby Al-Jadeed that the efforts of the investigation committee into corruption cases are continuing, and have nothing to do with the end of the government’s tasks, explaining that the committee frequently receives many reports of corruption cases, but implementation requires multiple procedures, including access to evidence. Verify them and obtain judicial approvals.

The Iraqi Minister of Justice, Salar Abdul Sattar, said that his country sent letters through its embassies around the world to all countries in which there are looted Iraqi funds, whether they were deposited in banks before the occupation of Iraq by the Americans before 2003, or resulting from money laundering that happened after this date.

Traditional agriculture contributes to the waste water (Ahmad al – Rubaie / AFP)
Arab economy
Iraqi water crisis: tendency to skip the means of irrigation primitive
said in remarks quoted by the official newspaper “Sabah” to the formation of committees through the legal department at the Ministry of Justice in collaboration with the Ministry of Foreign Affairs to directly address The authorities of those countries and the recovery of these funds.

He expressed his hope that the law will be studied objectively and extensively by the House of Representatives in the next session, with the possibility of amendment, making observations and sending it to the Presidency of the Republic again, pointing out that “the law for recovering corruption proceeds is important for Iraq and provides the state treasury with the money that was stolen, after the parliament votes on it.” Representatives.”

Mikati Al-Kazemi, Dalati, Nahra,
Taqah,
Lebanon, asks Iraq to increase the quantities of oil derivatives.
On Thursday, the Iraqi authorities announced the arrest of the losing candidate in the elections, former member of the Sadrist movement, Sabah Al-Kinani, red-handed for receiving a bribe in Baghdad, explaining that Al-Kinani was caught red-handed.

At the end of August 2020, Prime Minister Mustafa Al-Kazemi formed a committee to “investigate corruption and important crimes” headed by Lieutenant-General Ahmed Abu Ragheef, with the membership of officers from the Ministry of Interior, the Intelligence and National Security Services, and the Integrity Commission, which was granted wide powers, and the Counter-Terrorism Service was assigned a task Execution of decisions issued by investigative judges or specialized courts in matters pertaining to the investigation committee in corruption cases, in accordance with the law.

Al-Kazemi also authorized the Commission to investigate corruption cases, the right to request any information related to the cases it is considering, from ministries, or institutions not affiliated with the ministries, and to summon those whose conduct the investigation requires to be summoned after determining their capacity, with the exception of the accused who cannot be brought without a decision from the competent judge. .