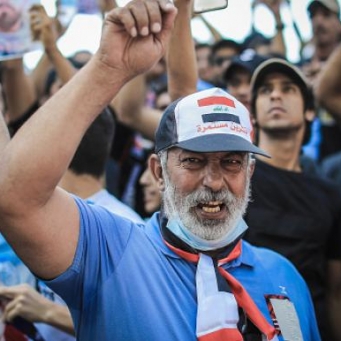 Although there are no signs of rapprochement between the two poles of the current political conflict in Iraq over the position of prime minister, they are the “Sadr movement” led by the cleric Muqtada al-Sadr, and the forces allied to Iran, which recently organized themselves within what is known as the “coordinating framework” led by the former prime minister. Nouri al-Maliki, however, all the current probabilities in Baghdad and Najaf speak of that neither of the two competing camps will be able to nominate the next prime minister without the approval and acceptance of the other party, which is what the Najaf authority, represented by Ali al-Sistani, is pushing towards. This means that the most likely solution in the crisis is a consensual prime minister, similar to the scenario of the 2018 elections, which brought Adel Abdul-Mahdi to the premiership, and after him Mustafa Al-Kazemi, even with expectations that this crisis will continue until the end of this year.

A source close to al-Sadr denied that there was any direct contact between the latter or members of the political body in the “Sadr movement” and the “Al-Fatah” and “State of Law” alliances, the two allies backed by Tehran, contrary to what was reported by Iraqi local reports. The source said, in a telephone interview with Al-Araby Al-Jadeed from the city of Najaf, yesterday, Friday, that the leader of the “Wisdom Movement” Ammar Al-Hakim is currently seeking to “wet the atmosphere” between the two Shiite political camps, stressing that “this endeavor culminated in the cessation of tense statements in the media.” Since last Monday evening, with the exception of al-Maliki’s alliance, it is moving seriously to prevent the arrival of a Sadrist prime minister or a candidate from the Sadrist movement and incite others in this direction.”

Iraq
Arab reports The
losers in the Iraqi elections review: tents in front of the Green Zone The
source spoke of a “veto” on Maliki’s return to the prime ministership by several parties inside and even outside Iraq, but at the same time he admitted that “the birth of the new government will not be far from the consensual framework.” Among the four main Shiite political blocs currently (State of Law, Al-Fateh, the Sadrist Movement, and the Wisdom Movement), which is also supported by the Najaf authority, to ensure that the government is stable. But this does not mean giving up the right of the “Sadr movement” to “be the largest electoral bloc,” according to the source.

On the other hand, the political forces do not seem to have many options available regarding the personality of the next prime minister, which prompted one of the Iraqi politicians to borrow the Lebanese equation in this context, regarding the limited personalities that can achieve the minimum level of political consensus inside and outside Iraq. for the position of prime minister. The forces tasked with choosing the prime minister, according to the political custom in Iraq based on sectarian quotas (after the US invasion), are counting on the fierce competition between Sunni and Kurdish political forces over the selection of a speaker of parliament and a president, meaning that the selection of the presidency and parliament precedes the selection of the prime minister.

In this context, several names to head the next government are heard in Baghdad, most notably the head of the Supreme Judicial Council, Faeq Zaidan (54), who has stable relations with various political forces in the country, in addition to Tehran, Washington and Riyadh. The name of the current National Security Adviser, Qassem al-Araji, who recently played a major role in reaching a truce between the factions allied to Iran and the international coalition, is circulated, in addition to having good relations with the Sunni and Kurdish Arab powers, and assigning him foreign tasks, most notably the Iraqi mediation between Saudi Arabia and Iran. The name of the leader of the “Dawa” party, Muhammad Shiaa al-Sudani, is also put forward, along with Jaafar al-Sadr, the Iraqi ambassador in London and cousin of Muqtada al-Sadr. As for the inability to agree on a name for the prime minister, the name of Mustafa Al-Kazemi will be resubmitted to head the government, especially with external acceptance in this regard.

In this context, the Iraqi politician Ghaleb al-Shabandar told Al-Araby Al-Jadeed that “until now no names with political approval have been presented even within the same single bloc, and news in Iraq changes from hour to hour, and there are parties that deliberately fabricate false news and rumors, and information leaks.” The media is mistaken, but the leaks from within the political forces currently concerned with the matter consider Al-Kazemi a good option.” Shabandar added: “To be honest, there are names that are being proposed, yes, but they remain weak, and Al-Kazemi has good fortunes and succeeded in making progress in several files, the most important of which is saving the army from the collapse that Adel Abdul Mahdi almost caused, and avoiding a bloody confrontation in crises.” He concluded by saying that “there is another sensitive point, which is that any prime minister who comes from any bloc will represent a danger to the other blocs, meaning that he is biased towards his bloc at the expense of the remaining blocs, so the general atmosphere favors the prime minister being consensual, but from outside the Shiite blocs. current.”

For his part, the Iraqi politician Qusai Mahbouba saw that the secrets of the current negotiations in Baghdad confirm the withdrawal of Nuri al-Maliki’s name from the nomination for prime minister, and the submission of other names in his place, the most important of which are Muhammad Shia al-Sudani, and Basra Governor Asaad al-Eidani, in addition to the presence of other names calculated on al-Sadr, including Nassar al-Rubaie and Mustafa al-Kazemi, pointing out in a media statement that the “Al-Fateh” coalition led by Hadi al-Amiri agrees with everyone, provided that he is not removed from the government.

Commenting on this, the researcher in Iraqi political affairs, Talib Al-Ahmad, considered that the consensus between the two conflicting camps in Baghdad with regard to heading the government is an inevitable result. Al-Ahmad explained, in an interview with Al-Araby Al-Jadeed, that the Sadrist movement has two options, the first is to take the entire government basket and form it by itself without others, which is a difficult matter, and the second option is to put forward a consensual name through the movement that is accepted by others, and this is likely in the The Iraqi scene now, regardless of the electoral results of the influential political forces, considering that the second option will also give al-Sadr a space to move in case this government fails, given that the prime minister is consensual and does not represent the “Sadr movement.”

Al-Ahmad believed that “consensus on Al-Kazemi is more possible than other names presented, without neglecting the existence of fears among some forces that Al-Kazemi will return to the presidency of the government for the next four years, with full powers and with internal and external support,” in reference to the forces allied to Iran opposing the Iraqi openness, which During Al-Kazemi’s government, he investigated the external environment and his policy of strengthening the state’s security institutions, specifically the army, against the influence of the armed factions.

Several names of prime ministers are frequent in Baghdad, most notably the head of the Supreme Judicial Council, Faeq Zaidan

In the meantime, civil and independent figures who won the last elections are continuing their movement to form a new coalition within parliament under the title of civilian, which will be the first of its kind since 2006, which witnessed the formation of the first elected parliament in the country. In this context, the leader of the civil “extension” movement, Alaa Al-Rikabi, held, during the past two days, a series of meetings in Najaf and Baghdad, before leaving for the city of Sulaymaniyah to meet with the leaders of the opposition Kurdish civil movement in the Kurdistan region of Iraq, in the north of the country, represented by the “New Generation” movement. , which managed to obtain 9 seats in the new Iraqi parliament. Al-Rikabi said, in a brief statement to Al-Araby Al-Jadeed, that civilians are seeking “a real opposition in the next parliament,” adding that “opening the files of corruption and violations and holding those involved in them accountable will be our first work,” stressing that his coalition will not participate in any government based on quotas. sectarian and partisan.

According to a prominent member of the “Extension” movement, who spoke to “Al-Araby Al-Jadeed” on condition of anonymity, the current movement seeks to form a horizontal coalition of independents and civilians, with more than 40 seats in parliament, and this will include the Kurdish movement in the Kurdistan region, as well as independents in The regions of Baghdad, the north and the west, as is the case in southern Iraq. The source added that what is common in this alliance is the scramble with the traditional religious parties in Baghdad and nationalism in the Kurdistan region and the creation of a new political equation, with civilians on the other side, and the goal being a citizenship state, revealing that the new alliance may be officially announced after the announcement of the ratification of the election results. He expressed his hope “to attract new independent representatives, despite the fact that some parties that scored modest results in the elections are now offering huge sums to independent deputies in order to join them in an effort to increase the number of their bloc seats in parliament,” he said.