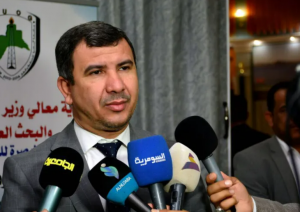 Iraqi Oil Minister Ihsan Abdul-Jabbar said today, Wednesday, that he expects oil prices to reach $100 per barrel in the first and second quarters of 2022, with global stocks falling to their lowest levels.

Abdul-Jabbar pointed out – at a conference of the ministry in Baghdad – that the oil industry is going through a state of recovery today, after the rise in oil prices currently to the level of 85 dollars per barrel.

The official spokesman for the Iraqi Ministry of Oil, Assem Jihad, said that the rise in oil prices in the global market is a good indicator to support Iraq’s federal budget for 2022.

Data showed that the Iraqi government is currently studying the development of a federal budget for the country for 2022, based on the price of $ 50 per barrel, a base price to support the federal budget and reduce deficit levels.

And the Bloomberg agency, which specializes in economics, quoted Marco Dunand, CEO of the commodity and energy trading company, Mercuria Energy Group, as predicting that the price of oil in global markets during the coming winter would reach $100 per barrel, adding that the most likely price range is between $80 and $90 a barrel. .

Dunand considered that higher energy prices will raise the inflation rate, in light of the global economy recovering from the repercussions of the Corona virus pandemic, indicating the possibility that prices will continue to rise.

He added that it is difficult to imagine that the market’s psychology is not optimistic about the price hike during the winter.

Brent crude traded near $86 a barrel last Monday, the highest level in 3 years, supported by the significant increase in demand.

Putin said – at an economic conference in Moscow – last Wednesday, “This (the price of $ 100 a barrel) can be reached… We and our partners in OPEC + are doing everything in our power to achieve stability in the markets.”