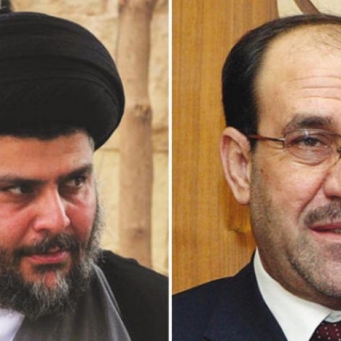 Former Prime Minister Nuri al-Maliki seeks to win the largest parliamentary bloc, and to return again to the premiership. The State of Law Coalition; The winner is 36 seats. He does not hide these ambitions, but he is facing his opponent, Muqtada al-Sadr, and his allies from the losing factions, which are looming with military action on the ground.

A source close to al-Maliki said that al-Maliki “tested all the winners of the elections about their orientations in the coalition.” He is now considering the next step. According to leaders in the State of Law Coalition; “Al-Maliki wants to form the largest bloc, without excluding his traditional opponents in the Shiite arena.”

Al-Maliki is seen, seven years after his departure from the presidency, as a “man of crisis”, with a history of problematic political and security incidents, but the results of the recent elections put him again on the path of competition. Al-Maliki is superior to many in his ability to negotiate, and his ability to design political messages, adapting them to the public at times, and to his partners or opponents at other times. However, the choice to trust him is still questionable and divided.

During the past few days, the writer conducted interviews with 3 Iraqi leaders, who were known for their opponents of al-Maliki between 2010 and 2014, and collected contradictory impressions about the current scene. The summary of those dialogues showed that al-Maliki is able to “set the Shiite rhythm” and end the engines of turmoil among the forces on the ground, but he is also “inclined to turn against partners, and he has ambitions to limit influence to his hand and his entourage.”

All Iraqi political forces are reluctant to show a clear position on joining an alliance led by al-Maliki. With regard to the Sunni and Kurdish blocs, they prefer “waiting for a Shiite-Shiite consensus to address the crisis caused by the losers in the polls.”

A Kurdish political advisor says: “The calculations are complicated! If we agree with al-Maliki, what will al-Sadr do? Where will the weapons of the factions, whose seats in Parliament have fallen to about 20, go?

but chest; The winner of 73 seats in the new parliament confuses al-Maliki’s calculations. The latter is also aware that “the Sadrist movement” leads the list of winners with the largest number of seats.

Although al-Maliki actually began designing his strategy for the major bloc; It provides political support for those objecting to the election results, and to a large extent agrees with the factions that accuse the authorities of rigging them. the case; This will not be a contradiction, but rather a maneuver by al-Maliki to open a window of agreement between him and the others.

Among the options that seem available to al-Maliki is to take advantage of the pressure exerted by the factions on the street, to reach an understanding with al-Sadr to settle differences and form a major bloc that offers some guarantees to the losers. “Al-Maliki knows, despite everything, that he is unable to oust al-Sadr”; Says a senior politician from “the rule of law.”

A source from within “State of Law” says that al-Maliki believes that the international community – the United States in particular – does not prefer dealing with a Sadrist government, under a political platform that raises anti-Western slogans. It seems that al-Maliki is trying to formulate a hypothesis that will force al-Sadr to negotiate.

On the other hand; The chest seems calmer than necessary. The last time he sent a message to al-Maliki, was when one of his aides tweeted about the mistakes and mistakes of the “Dawa Party”, but it included a veiled reference to the negotiation: “He (Al-Maliki) tried and did not succeed … and the tried does not try.”

But the chest itself; Whoever insisted on an exclusive Sadrist government has relatively retreated from that. He wrote last week that “winning first in the elections is not more important than meeting the needs of all Iraqis.”

the case; Negotiations to form the new government will not be easy at all. The results, which appear to be mathematically decisive, open the door to difficulties in terms of disengaging or exaggerating the conflict between Maliki and al-Sadr.