Iraq: political understandings transfer controversial laws to the next parliament

Iraq: political understandings transfer controversial laws to the next parliament 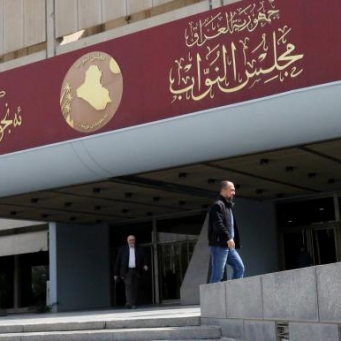 Iraqi officials and parliamentarians revealed political understandings that led to a decision to deport quite a few laws that the Iraqi street is waiting for approval, to the next parliamentary session due to differences over many of them, and another need for a longer period of time to discuss them, which is not currently available, especially with The remaining period of the parliament’s life, as it will dissolve itself on the seventh of next October, three days before the legislative elections on October 10, in its fifth edition since the US invasion of the country in 2003.
Among the most prominent laws that will be transferred to the next parliament, the oil law And the gas and domestic violence law, the child protection law, the federal service law, the civil status law, the stolen money recovery law, and finally the compulsory conscription law, which the government approved in early September, and sent it to Parliament for the purpose of voting on it.

The last legislative holidays of the Iraqi parliament ended on 4 September, and parliamentarians announced the resumption of new legislative and oversight activity, in order to complete the reading and approval of some important laws. However, the independent deputy, Basem Khashan, confirmed to Al-Araby Al-Jadeed that “the current month will not witness any parliamentary sessions, and if it does, it will end in less than an hour because most parliamentarians are busy in the political movement and electoral promotion for their benefit and the interest of their parties.” He explained that “most of the important laws, specifically the public and service, will be carried over to the next session, and their emergence (the laws) may be disrupted due to the unclear and dispersed Iraqi conditions.”

At least 10 important laws, which will carry over to the next parliamentary session

For his part, an employee in the legal department of the Iraqi parliament told Al-Araby Al-Jadeed that “there are at least 10 important laws that will actually move to the next parliamentary session.” He explained that “there is no decision to do so, but there is an understanding between the main blocs on the matter, especially since most of these laws have political differences, such as the oil and gas law, and the law against domestic violence, which some Islamic political forces consider a clone of Western laws because it contains provisions that allow The battered girl or wife may request protection, provide her with an alternative housing, and pay education dues, which these forces consider contributes to the dismantling of families.” The same spokesman considered that the transfer of laws as a whole is “a step that affects the Iraqi street in general.”

And at the beginning of this month, a member of the Parliament’s Security and Defense Committee, Abdel-Khaleq Al-Azzawi, confirmed the transfer of the compulsory service law to the next parliamentary session, pointing out that it “requires extensive study, because its implementation will take not a short period.” Al-Azzawi added in press statements that if the law is passed, “the number of recruits will reach record numbers of more than one million.”

Among the laws that will also be transferred to the next parliament, the Oil and Gas Law, which is supposed to establish a system for managing oil operations in Iraq, and aims to compensate the oil-producing provinces for the environmental damage they are exposed to, in addition to forming a Federal Energy Council under the administration of the Prime Minister to take decisions related to the country’s oil policy.

Al-Araby Al-Jadeed contacted a member of the Iraqi Parliament’s Oil and Energy Committee, Sattar Al-Jabri, who said that “the remainder of the current legislative period may not be enough to pass the oil and gas law, which is considered the most important strategic law, and there is a great possibility of it being transferred to Iraq.” the next parliamentary session.

Shaker: Some parliamentarians are currently preoccupied with their electoral campaigns at the expense of voting on the laws that Iraqis are waiting for

But another member of the same committee pointed out that “political pressures by the Kurdish parties prevented voting on this law, or even its circulation at the reading level in the House of Representatives,” indicating to “Al-Araby Al-Jadeed”, on condition that his name not be mentioned, that “the law includes Clauses related to regulating the sale of oil, and the return of all funds to Baghdad, which is not accepted by the Kurdistan Regional Government in Erbil, which trades in oil illegally, and cooperates with a number of countries, including the Gulf and others in the vicinity.

For her part, the leader of the “Victory Coalition”, Nada Shaker, said that “the lack of political agreement to pass a number of important laws for the Iraqi people is what delays voting on them, and there are no other reasons.” She added, in connection with Al-Araby Al-Jadeed: “Despite the talk about the lack of financial allocations due to the economic hardship that Iraq has been experiencing since ISIS occupied a number of provinces in 2014, some laws do not need any money, and they are enforceable with the available capabilities, Including the oil and gas law, in addition to legal draft laws, which are also important, such as child custody, the Iraqi National Day, the law of the Ministry of Culture, and others.” Shaker explained that “some political blocs and parliamentarians are currently preoccupied with their electoral campaigns at the expense of voting on the laws that Iraqis are waiting for.”

Among the government files that were transferred by partisan and political agreements, is the file of the investigation into the killing of demonstrators who went out in October 2019 and in the following months to the squares, but were violently repressed, to the point of liquidating and assassinating some of them, until the number of activists and protestors victims, more than 700 dead. The government of Mustafa Al-Kazemi had promised to complete this file and reveal the identity of the killers and the parties to which they belong, and the authorities that issued orders to kill the activists, but it does not seem that the current time is sufficient for Al-Kazemi to fulfill his promise.

Finally, the head of the Human Rights Committee in the Iraqi parliament, Arshad Al-Salihi, confirmed that the file of the investigation into the killing of demonstrators will be transferred by the Al-Kazemi government to the next government, indicating in press statements, that “the judiciary issued more than 21 arrest warrants against people accused of involvement.” The killing of demonstrators, as well as warrants were issued against protesters who were involved in acts of sabotage, burning and riots that caused the death of a number of security men.

In turn, the Iraqi researcher and political analyst, Abdullah Al-Rikabi, saw that “the political blocs are racing to adopt projects that serve specific segments of the public, specifically their audience, and therefore, they oppose any laws that serve other segments, and this is what is happening with the Information Crimes Law and the Domestic Violence Law, which they reject.” Parties close to Iran, while other parties seek to pass specific laws to defy other powers, such as the oil and gas law. In an interview with Al-Araby Al-Jadeed, Al-Rikabi confirmed that “political forces that own armed factions are currently opposing the compulsory service law, so that it does not count as a victory for Al-Kazemi’s government, while a file such as revealing the killers of the demonstrators, no result can be reached on it, given the political and security problems it may generate.”