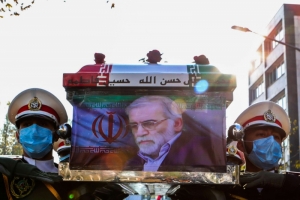 Washington – The New York Times revealed on Saturday new details related to the operation to kill the most prominent Iranian nuclear scientist, Fakhrizadeh, and said that it was carried out by a new high-tech weapon equipped with artificial intelligence and multiple cameras operating via satellite.

She pointed out that the assassination took place without any agents on the ground, using a “killer robot” capable of firing 600 rounds per minute.

The newspaper says that its information regarding how the assassination was carried out was based on interviews with American, Israeli and Iranian officials, including two intelligence officials familiar with the details of the planning and implementation of the operation.

A prominent Iranian scientist, Fakhrizadeh, 59, who is accused by Israel of being behind a “military” nuclear program, which Tehran denies, was killed in an attack on his car in the city of Absard in Damavand province, east of Tehran, last November.

Iranian President Hassan Rouhani accused Israel of orchestrating the assassination of the world. Tehran has vowed to respond.

Preparations for the assassination, according to the New York Times, began at the end of 2019 and early 2020.

After the killing of Soleimani, Iran increased security reinforcements around its prominent officials, including Fakhrizadeh, who is guarded by an elite group of armed and well-trained Revolutionary Guards who communicate through encrypted channels.

Fakhrizadeh’s movements were in convoys of four to seven vehicles, constantly changing routes and timings to thwart potential attacks.

The newspaper says that Israel used various methods in previous assassinations, one of which was by poisoning the first nuclear scientist on the Israeli assassination list in 2007, while the second was killed in 2010 by detonating a remote bomb attached to a motorcycle.

In the last operation, an Iranian suspect was arrested, who confessed to carrying out the operation and was later executed, forcing the Mossad to change its tactics. The following four assassinations were carried out between 2010 and 2012 by men on motorbikes, who were either shooting directly at the targets or They plant adhesive packages in their cars, and then flee.

But the security level of the armed force that protects Fakhrizadeh, calculated for such movements, and made the tactic of using motorcycles impossible, according to the newspaper.

She added that the planners of the assassination of Zadeh discussed the option of detonating an explosive device along the path of the Iranian nuclear scientist, in order to force the convoy to stop so that the snipers could attack it.

“This plan was excluded due to the possibility of an armed clash, during which many casualties may fall,” she added.

Eventually, the idea of ​​a remote-controlled submachine gun was proposed, but there were another set of logistical complications, because its size and weight made it difficult to transport and conceal without the plan being exposed.

According to an intelligence official familiar with the plan, Israel chose an advanced model of the Belgian-made FN MAG submachine gun linked to an advanced intelligent robot.

The official said that the system was not different from the “Sentinel 20″ system that the Spanish company “Escribano” manufactures.

The weight of the machine gun with the robot and the rest of the accessories combined was about a ton, so the equipment was dismantled into small pieces, and then smuggled to Iran in different ways and times, and then secretly reassembled in Iran.

The robot was built to fit the size of the tank of a Zamyad pickup truck, popular in Iran, and cameras were installed in multiple directions on the truck to give the wheelhouse a complete picture of not only the target and its security details, but the surrounding environment as well.

Finally, the truck was rigged with explosives, so that it could be remotely detonated and turned into small pieces after the killing was over, in order to destroy all evidence.

Next, there was a challenge that needed to be addressed, which was to make sure that Fakhrizadeh was driving the car and not one of his sons, wife or bodyguard, so that the wrong person was not targeted.

Since Israel lacks surveillance capabilities in Iran because it is unable to use the drones used to locate the target prior to the strike, a car was placed on the side of Zadeh’s road and pretended to be disabled.

The vehicle was positioned near a junction and fitted with a satellite camera that sent images directly to the operation’s headquarters.

The operation began at dawn on Friday 27 November 2020, and the truck carrying the machine gun was parked on Imam Khomeini Street, where Iranian investigators later found that the surveillance cameras on the road had been disabled.

Shortly before 3:30 p.m., the convoy reached a bend where Fakhrizadeh’s car slowed down, only to be recognized by the second idled car with cameras and to see his wife sitting next to him.

The convoy turned right on Imam Khomeini Street, slowed down due to a bump, and then the machine gun fired a burst of bullets that hit the front of the car.

It was not clear if the shots hit Fakhrizadeh, but the car swerved and stopped, after which the person controlling the machine gun remotely fired another shot that hit the windshield at least three times, at least one of which hit Zadeh in the shoulder.

Zadeh got out of the car and took cover in its front door, and the Iranian Fars news agency reported at the time that three bullets penetrated his spine, and he died instantly.

Then the car carrying the machine gun exploded and scattered to pieces.

The whole process took less than a minute, during which only 15 bullets were fired. Iranian investigators indicated that the bullets did not hit Zadeh’s wife, who was sitting a few centimeters away.

According to the National Council of Resistance of Iran, Fakhrizadeh was born in the city of Qom in 1958, and served as Deputy Defense Minister and a brigadier general in the Revolutionary Guards. He holds a doctorate in nuclear engineering and taught at Imam Hussein University in Iran.

A high-ranking Iranian source told Reuters in 2014 that he is a “wealth and expert” dedicated to Iran’s technological advancement and enjoys the full support of Iran’s Supreme Leader Ayatollah Ali Khamenei.

The UN report issued by the International Atomic Energy Agency in 2011 described Zadeh as a central figure in the suspected Iranian work to develop technology and skills needed to make atomic bombs, and indicated that he may still have a role in such activity.

It is also believed that Fakhrizadeh was involved in the development of Iran’s ballistic missiles, and an Iranian source told Reuters that he is considered the “father of this programme.”