Shafak News publishes the text of the Iraqi government’s decisions

Shafak News publishes the text of the Iraqi government’s decisions 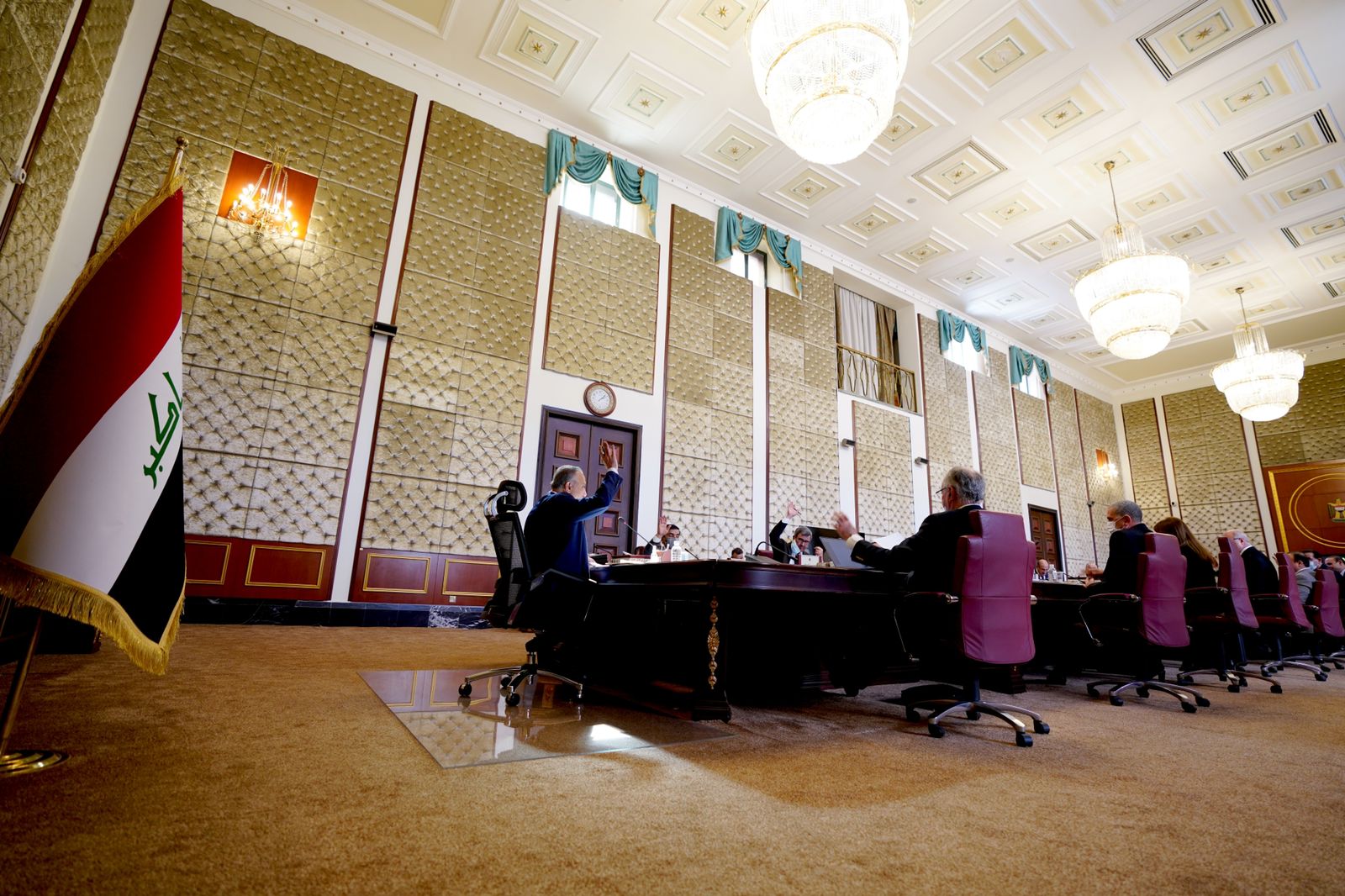 Shafaq News/ The Iraqi government held its weekly session, headed by Mustafa Al-Kazemi, on Thursday, during which it took a number of decisions.

According to a statement by Al-Kazemi’s office received by Shafaq News Agency, after discussing the topics on the agenda, the Council of Ministers issued the following decisions:

First / Based on what was stated in the instructions for implementing the federal budget for the year 2021, paragraph (gifting goods and services), and in view of the participation of our dear country as a guest of honor in the Riyadh International Book Festival that will be held in the Saudi capital – Riyadh for the period from 1-10 October 2021, it was approved to authorize Mr. Minister of Culture, the authority to gift books

And Iraqi publications for Arab and international cultural figures.

Second / Approval of the issuance of the Leadership College system, which was audited by the State Council, based on the provisions of Article (80 / item III).

Of the Constitution, and Article (14) of the Law of the Defense University for Higher Military Studies, No. (4) of 2016, taking into account the notes of the Legal Department of the General Secretariat of the Council of Ministers indicated in its memorandum numbered (M.D. / S/2/2/ 31/559/349 LL) dated August 15, 2021.

Third / Approval of the issuance of instructions to facilitate the implementation of the provisions of the Yazidi Survivors Law No. (8) of 2021, based on the provisions of Article (12) of the aforementioned law, taking into account the notes of the legal department in the General Secretariat of the Council of Ministers confirmed by its memorandum numbered (M). D/Q/2/2/71/628/394 LC) dated August 31, 2121.

Fourth / Approval to participate in the subscription of the (sixth) general increase in the capital of the Islamic Development Bank, equivalent to (20229909/90) dollars, only twenty million two hundred and twenty-nine thousand nine hundred and ninety-nine dollars, for the period from 2023 to 2036, for the purpose of maintaining The voting power of Iraq is currently at (0.27%), provided that the payment mechanism will be in the form of semi-annual installments starting from the date of (1 January 2023).

Fifth/ Approval of the recommendation of the Ministerial Council for Energy (111 for the year 2021), regarding the following:

– Approval of exempting the North Refineries Company from the provisions of paragraph (and-1) of Article (3) of the instructions for implementing the federal general budget for the fiscal year/2021; The purchase is through the purchase or leasing committees up to (100,000,000) dinars, only one hundred million dinars without a contract, according to what was stated in the Cabinet Resolution (344 of 2019), for the continuation of the rehabilitation and reconstruction of the refineries affiliated with the North Refineries Company.

Sixth/ Approval of the recommendation of the Ministerial Council for Human Development (8 for the year 2021), regarding the following:

2. Amending paragraph (1) of the aforementioned cabinet decision, to start implementing the scientific and literary system for the year (2022-2023) instead of (2021-2022), with the amendment of school curricula and the provision of financial allocations for printing books.

Seventh / Approval of the issuance of the second amendment system to the system of protocols No. (4) of 2016, based on the provisions of Clause (Third) of Article (80) of the Constitution, and Article (2) of the Protocols Law (26 of 2000).

Eighth/ Approval of the recommendation of the Ministerial Council of Economy regarding the approval of exempting the Iraqi-Jordanian Dujaila Company, affiliated to the Ministry of Industry and Minerals, from the debts it owes to the account of the Ministry of Agriculture, based on Legislative Resolution No. (44 of 1997).