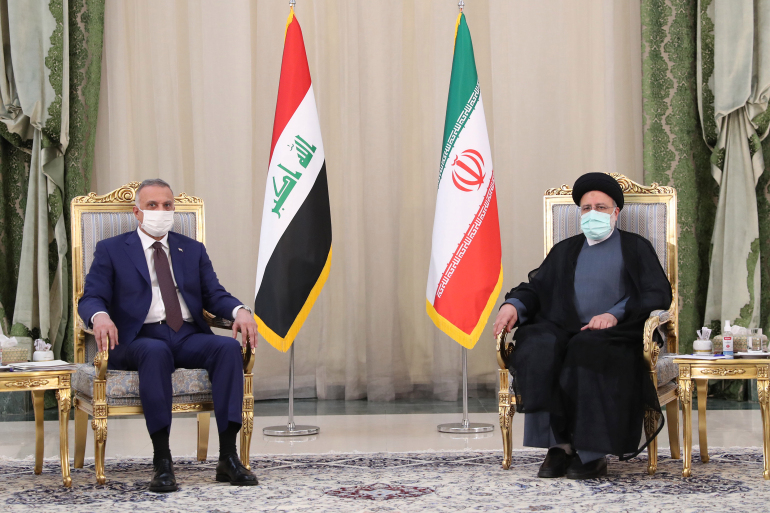 Shafaq News/ The Iraqi Prime Minister, Mustafa Al-Kazemi, confirmed, during a meeting with the Iranian president, on Sunday, that Iraq is seeking to take important steps regarding financial commitments to Iran and the Shatt al-Arab dredging operations.

Al-Kazemi’s media office said in a statement, received by Shafak News Agency, that “the latter and the President of the Islamic Republic of Iran, Ibrahim Raisi, presided over the expanded meeting between the Iraqi and Iranian delegations, which was held today, Sunday, in the Iranian capital, Tehran.” .

At the beginning of the meeting, Al-Kazemi renewed his congratulations to my president in assuming his duties, and his government’s wishes for payment and success, and stressed that the renewal of his visit to Iran shows the importance that Iraq attaches to strengthening cooperation between the two countries, and its aspiration to consolidate bilateral partnership.

He explained that a number of strong ties and relations in various fields unite Iraq and its neighbor Iran, pointing out that there is a desire to expand trade and economic exchange and all aspects of inter-partnership.

During the meeting, the Prime Minister indicated that “Iraq is seeking to take important steps regarding financial commitments to Iran, and the Shatt al-Arab dredging operations.”

Al-Kazemi also revealed Iraq’s intention to take a decision to lift the condition of obtaining entry visas in advance in front of Iranian visitors coming through airports, after the end of the ceremony commemorating the fortieth anniversary of Imam Hussein (peace be upon him), and indicated that the Iraqi government agencies are making every effort to make this occasion a success and facilitation. In front of the participants coming from all Islamic countries.

Iranian President Ibrahim Raisi, for his part, praised Prime Minister Mustafa Al-Kazemi’s step in facilitating the entry of Iranian visitors participating in the commemoration of the fortieth anniversary of Imam Hussein (peace be upon him), as well as the bilateral efforts made to accelerate the rail link between the two countries.

Raisi affirmed his government’s desire to strengthen economic and trade relations with Iraq, which places this endeavor among its priorities, recalling that the Islamic Republic of Iran believes that a strong and capable Iraq will serve the region, as well as in the interest of positive relations between the two countries.

Iraqi Prime Minister Mustafa Al-Kazemi arrived in Tehran this morning, on a second visit during his tenure of office, and the first since the new Iranian President Ibrahim Raisi took office.

Since 2019, a series of joint coordination meetings between Iraq and Iran have been held in Tehran and Baghdad within the framework of the understandings that took place in the Shatt al-Arab, or what the Iranians call the “Arvand River”, but these meetings have stopped in recent years due to the pandemic.

Before that, a temporary technical working group met for the Shatt al-Arab (Arvand River) dredging, where the experts of the two countries discussed the timetable for the operational operations related to cleaning this river.

And the Iraqi Ministry of Water Resources announced, earlier, that it had taken several measures to confront the possibility of the progress of the salt tongue inside the “Shatt Al-Arab” due to the great shortage in the Karun River imports and for the purpose of avoiding an increase in salt concentrations in the center of Al-Faw district..