Iraq is the new power broker in the Middle East

Iraq is the new power broker in the Middle East 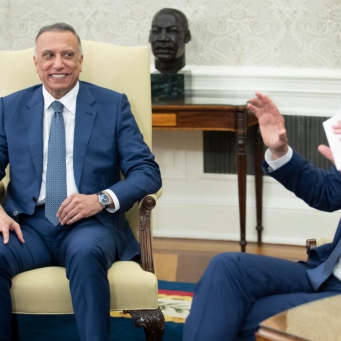 After decades of merely introducing chaos, Baghdad is trying to become a leading power in the region. Iraqi Prime Minister Mustafa al-Kadhimi listens while US President Joe Biden speaks.
Iraqi Prime Minister Mustafa al-Kadhimi listens as US President Joe Biden speaks during a bilateral meeting in the Oval Office of the White House in Washington on July 26,
Turkish Ahval Turkish news website reported last week that the Iraqi government had invited Turkish President Recep Tayyip Erdogan to attend a summit. Regional security includes Iran, Syria, Saudi Arabia, Jordan, Kuwait and the European Union. Since then, other news outlets have reported that the guest list also includes the United Arab Emirates, Qatar and Egypt. The meeting, scheduled for late August, is just the latest effort extending into 2019 by the Iraqi leadership to be a constructive force in the Middle East.

This represents a big change. Before domestic instability, violence, and corruption in the wake of the US invasion became the dominant narrative about Iraq, US media, analysts, and government officials focused on the country as a source of regional instability. Not without good reason, of course. Iraqis played a role in the attempt to overthrow King Hussein in Jordan in September 1970. A decade later, Iraqi President Saddam Hussein launched military operations that became the eight-year Iran-Iraq war that killed between one and two million people. Saddam then invaded Kuwait in August 1990, declaring it the nineteenth Iraqi province.

Now, Iraqi Prime Minister Mustafa al-Kadhimi, who has earned high marks from almost everyone for his determination to transform Iraq’s political and economic fortunes, believes that to have a chance to solve problems inside Iraq, he must play a role in helping to settle the problems around him. He might be interested in something. Instability in Iraq’s neighborhood contributes to the country’s multiple problems — but does Baghdad have the influence, resources, and prestige to shape a more stable region? The Iraqi leader has some assets to work with here, mostly his own stature and the relationships he nurtured as head of Iraq’s intelligence service between 2016 and 2020, but it remains unclear why the Saudis, Emiratis or Egyptians need Iraq’s help.

The first indication of the Iraqi government’s new and more constructive approach to the region actually predates Al-Kazemi’s ascension to the premiership. In the spring of 2019, Egypt, Jordan, and Iraq announced their intention to establish a mechanism for economic and geopolitical cooperation. At the time, few who did took notice, and tended to dismiss the effort as an increasingly irrelevant venture. Iraq has suffered countless political and security problems since Operation Iraqi Freedom and has had distant and difficult relations with other regional powers. Egypt has turned inward and has shown little ability to shape events in the region outside the Gaza Strip. Jordan has lost ground in recent years as both the Trump administration and the Netanyahu government in Israel have preferred to deal with the Saudis and Emiratis.

After two years and four leadership meetings, the Iraqis, Egyptians, and Jordanians agreed to build a pipeline from Basra to Aqaba with plans to extend it to Egypt, connect their electricity networks to reduce Iraq’s dependence on Iran, and supply the Egyptians and Jordanians. Companies have the opportunity to participate in the reconstruction of Iraq. As is often the case, what is put on paper may not materialize, but even if these plans are only partially realized, they are likely to benefit the Iraqis.

There are also clear political and geostrategic benefits to the trilateral relationship of Al-Kadhimi and Iraq. At the recent meeting between Egyptian, Iraqi and Jordanian leaders in late June, the prime minister emphasized that Arab countries seek to develop a “common vision through cooperation and coordination” to resolve conflicts in Syria, Palestine, Libya and Yemen. . At first glance, this seems like the kind of careless line that leaders use to fill the void and add oomph to their conversational contest, but in this context, it actually means something.

Al-Kadhimi suggests that when power passed to the Arab Gulf states about a decade ago, the regional security environment deteriorated. Iraq, Egypt and Jordan are now ready to pick up the pieces and promote stability. It is undoubtedly a statement that serves the interests of others and is not entirely true. The Egyptians, for example, are complicit in the Gaza freeze, supported Khalifa Haftar’s war in Libya, and quietly supported the Syrian regime. Not exactly a stabilizing force, but in the case of Iraq, Al-Kadhimi has quietly worked to end the regional rivalries that have exacerbated the problems of Iraq and the Middle East.

Last spring, Middle East watchers were excited about reports that Baghdad was mediating between Saudi Arabia and Iran. The Iraqis are also credited with pushing the reconciliation between Turkey and Egypt, and there are rumors that they are doing the same between Ankara and Abu Dhabi. Alleviating these regional rivalries would certainly benefit Yemenis, Palestinians, Libyans, Syrians, as well as Iraqis. But there is also an Iranian dimension to this communication. Al-Kadhimi is smart enough to know he can’t get the Iranians out of Iraq, so he needs to be more careful.

Establishing strong ties with important regional powers such as Egypt, Jordan, Turkey, Saudi Arabia, and the United Arab Emirates provides him with more depth and strength to pull Iraq out of Iran’s control without inviting Tehran to harm. The Iraqis are realistic, of course. Iran will always be influential and have interests in Iraq, but by taking on a greater role for itself among the Arab states, Al-Kazemi has a better chance of establishing something more akin to state-Iran relations than one that looks more like an oppressor.

What are the chances of Al-Kazemi’s success? To start, give the Iraqi commander credit for trying. Iraq’s internal problems are difficult enough to resolve without the increasing pressure of regional problems. In late 2019, for example, Turkish air strikes in northeastern Syria caused an influx of tens of thousands of Syrian Kurds into Iraq, further burdening the country. In the prime minister’s favour, there appears to be some real interest in calming regional tensions, but here’s the problem with declaring “Iraq is back” and making Baghdad the centerpiece of US policy in the region: To what extent can anyone attribute this desire? Who are the Iranian, Saudi, Turkish, Emirati or Egyptian leaders to appease Al-Kadhimi’s efforts? Perhaps they have decided in their own political and national interests that it is now time to pursue less inconsistent policies.