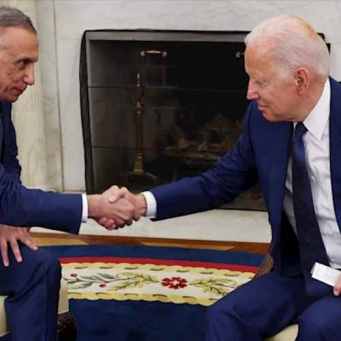 US President Joe Biden and Iraqi Prime Minister Mustafa Al-Kazemi signed an agreement officially ending the US combat mission in Iraq by the end of 2021, more than 18 years after US forces entered the country, at the conclusion of the fourth round of the strategic dialogue between Baghdad and Washington. In return, Baghdad confirmed Iraq’s commitment to protecting the international coalition personnel who provide advice and training.

The fourth round of the strategic dialogue between the two countries will be the last, according to the statements of the Iraqi Foreign Minister. Hence, the understandings that were concluded between the two sides during it will form the general framework governing the bilateral relations between them.

The first round of the strategic dialogue between the two parties was held virtually on June 11, 2020, while the second round was held in Washington, DC, on August 19, 2020, and the third was held on April 7, 2021. Among the prominent issues discussed during these rounds is the issue of the US military presence in Iraq. Especially with US officials leaking information before the last round of dialogue about the possibility of Washington moving to withdraw its forces from Iraq.

Not much information was revealed about the contents of the agreements that took place between Biden and Al-Kazemi, with the exception of some things that the two parties revealed in the press conference, which can be clarified in the following:

1- Transforming the status of US forces: The US-Iraqi agreement included the withdrawal of combat forces by December 31, and the transformation of the US military presence in Iraq into an advisory and training role. This is not a new matter that will lead to a real transformation of the US military role in Iraq. The official joint statement of the third round of dialogue between the two countries on April 7 last year stipulated the same thing.

This agreement can be viewed as a strategic tactic, aimed at removing embarrassment from Al-Kazemi, on the part of the Iranian-backed militias, which were pressing hard to remove these forces by directing operations targeting them, as well as supporting him politically in the face of political parties close to Iran, before the elections. The next parliament is in October.

The US President stressed the continuation of security cooperation with Iraq against terrorism during the new phase, which means the continuation of US intelligence support for the Iraqi forces. Although terrorism refers to ISIS, Washington believes that supporting the security capabilities of the Iraqi forces will qualify them in a later period to curb the threats emanating from Iran’s militias.

3- Strengthening Iraq’s independence from Tehran: Washington seeks to support Al-Kazemi’s efforts to maintain a sufficient distance from Iran, and Al-Kazemi sought to achieve this security, through his unsuccessful attempt to curb Iran’s militias, as well as trying to establish the New Mashreq project with Egypt and Jordan, or studying electrical interconnection with countries The Gulf, to strengthen Baghdad’s economic independence from Tehran.

Washington believes that the Iraqi government’s efforts to control Iran’s militias are still below par. The Iraqi security forces are seeking to secure the US bases, without trying to engage the perpetrators of these attacks.

4- Iraq not turning into a base to threaten the region: It comes within the possible understandings between the US and Iraq to ensure that Iraq is not a source of threat to its regional neighborhood, as the United States of America seeks to obtain commitments from the Iraqi government not to use its lands as a springboard for potential threats to its neighbors by affiliated militias Iran inside Iraq.

He explained this in the statements of the US ambassador to Iraq, Matthew Tueller, on July 28, in which he confirmed that Biden indicated, “The stability of Iraq is the stability of the region. The existence of Iraq as a strong, stable and unified country will be reflected in the region.”

5- Supporting the holding of Iraqi elections: Washington seeks to ensure free and fair Iraqi elections, and to exploit popular opinion against Tehran and the Iraqi politicians associated with it, in order to strengthen Mustafa Al-Kadhimi, who made efforts to curb Iranian influence.

It is noted that these elections will be pivotal, as Washington’s influence depends on the ability of the forces opposed to the Iranian presence to win these elections, which are specifically represented in Al-Kazemi and the Sadrist movement, and other forces that fear Tehran’s continuous attempts to dominate Iraq. In contrast, Tehran and its proxies in Iraq are seeking to achieve advanced positions in these elections, despite the Shiite popular protests against the class of politicians linked to Iran.

Tueller stressed that “there are some parties that want to obstruct the elections,” stressing that the United States “provides significant financial support, first to UNAMI, which will play a role in monitoring the elections, as well as to the Independent High Authority for Elections, through civil society and non-governmental organizations that provide technical support.” He also stressed that “the Iraqi people want to see fair elections, and for many Iraqis to participate in voting,” in order to cut the way for Iran’s parties from employing intimidation or vote-buying to maintain their current weight in Iraqi politics.

The main challenges to the success of the US-Iraqi understandings are as follows:

1- The extent of Iran’s response to Al-Kazemi’s requests: Iran is the main instigator of the Iraqi Shiite militias to target the American presence in Iraq. Therefore, it will be concerned with the results of this round of negotiations, especially with regard to the presence of US forces there.

Al-Kazemi is well aware of this, and therefore he was planning to visit Tehran after his return from Washington and after Ibrahim Raisi’s inauguration as president of the country, which was clarified in his statement, “We need stability, and for this I will visit Tehran after the inauguration of its new president. We have many pending files and there are common topics that need dialogue and solutions,” which reflects Al-Kazemi’s realization that Tehran is a major party in provoking unrest in Iraq, and that there is a need for Iran to control the behavior of its militias in Iraq.

Tehran is betting that the Biden administration may move to withdraw from Iraq, if the Shiite factions arrive to target its forces in Iraq, which tempts it to continue escalating its operations against the American presence.

2- The position of Tehran’s militias: The armed factions expressed their principled rejection of the results of this dialogue, even before the final statement was broadcast regarding the transformation of the combat forces to training and advisory tasks. in the country. Nasr Al-Shammari, Deputy Secretary-General of Harakat Al-Nujaba, one of the Shiite Popular Mobilization factions, threatened to “continue targeting US forces in Iraq even after changing the name.”

The commander of the Iranian Quds Force, General Ismail Qani, arrived in the Iraqi capital, Baghdad, on a “secret” visit on July 28, that is, after meeting Biden and Al-Kazemi, during which he will meet with the leaders of the Iraqi armed factions. It is noted that this visit will be a possible indicator of escalation, as Qaani’s visits, and before him the visits of former commander Qassem Soleimani, were anticipating intense escalation campaigns led by Shiite militias against US forces in Iraq.

It is noted that there is a division among the Shiite forces over the American presence, as the leader of the Sadrist movement, Muqtada al-Sadr, was one of the most prominent supporters of the shift in the role of the American forces, and even wrote a lengthy statement calling for the cessation of all operations, which were targeting the American military and diplomatic presence, in a message It reveals the Sadrist movement’s concern that the US withdrawal will increase the power of the Shiite militias linked to Iran in the face of those independent of it.

In conclusion, this latest round of strategic dialogue between Iraq and the United States will have significant effects, not only on the Iraqi interior, but also on regional security, which calls for monitoring Iraqi developments during the coming period, which will be a real test period for the government’s ability Iraq and the United States to confirm any agreements or understandings between the two sides, in light of the expected Iranian challenges.