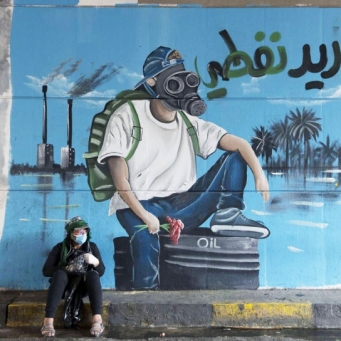 It was not long before the Iraqi Oil Minister, Ihsan Abdul-Jabbar, redressed his “dreadful” statements he made at the end of last week regarding the flight of major international investors in the Iraqi oil sector. It has been prolonged, and has made Iraq a country that repels investors in various sectors.

Abdul-Jabbar said on Sunday that Lukoil and BP want to continue working in Iraq, which is in stark contrast to his previous statements about the two companies’ tendency to leave the country, which is rich in energy resources.

“We have good relations with BP and we have been able to pay all the debts owed to the company,” he said at a press conference in Baghdad, as well as the case with the Russian company Lukoil. He added, “BP wants to continue to work in Iraq and implement important energy projects in the future.”

Sources at the Oil Ministry said that Abdul-Jabbar’s statements were made during a parliamentary session to which he had been invited on June 29.

Commenting on the minister’s conflicting statements, Iraqi sources considered that his first statements could not be issued from a vacuum and might reflect the truth or a large part of it, and that the clarification he later resorted to aimed at surrounding the state of panic raised by talking about the scenario of investors fleeing from the first vital sector in Iraq and the source is almost The only way to finance the Iraqi state budget.

The same sources pointed out that what the Minister of Oil said confirms what was reported earlier about the Iraqi government entering into difficult talks with foreign investors in the oil sector with the aim of persuading them not to leave the country after they complained about the difficult investment climate in the country and the threat of security and social unrest for their businesses. In reference to the many protests that took place in the central and southern regions of the country in particular, and their orientation towards oil fields and its transportation and marketing routes, to demand employment in the sector and the expulsion of foreign workers in it.

Economists believe that the fluctuation in oil prices in recent years has reduced the sector’s attraction to investors in several countries, especially in Iraq, where political and security uncertainty prevails in light of the presence of decision circles projected onto the fabric of the Iraqi state from personalities linked to Iran and armed factions that permeate the institutions that do not It interferes in security and political affairs only, but it also influences the economic decision and controls several sectors that it exploits to provide the necessary resources with which to cover its exorbitant expenses.

Thumbnail
Political and security problems have prevented the development of Iraq’s oil sector. For example, the goal of raising the daily production of crude to exceed the ceiling of 4.6 million barrels has been hesitant for more than ten years, which is theoretically allowed by the country’s huge oil reserves, but it actually collides with several technical and material obstacles.

After the recent oil shock, when Iraq found itself compelled to reduce its production within the measures of the Organization of Petroleum Exporting Countries (OPEC) to limit the deterioration in prices, it turned to negotiations with the international companies that manage its oil fields to reduce their budgets to develop the fields by thirty percent in light of the inability to touch With its production, the contracts concluded with it require the Iraqi state to compensate for any shortfall in its financial resources.

In light of the difficulty of financing the development of the oil sector, resorting to borrowing is the only solution. The Iraqi Basra Gas Company signed last week with the International Finance Corporation, the investment arm of the World Bank, a loan agreement of 360 million dollars to invest in gas projects.

On the other hand, Iraq is looking forward to entering China as a competitor to invest in its oil sector, but the Chinese steps in this field seem so far timid, which makes compensation for the withdrawal of international companies difficult in the foreseeable future.

Minister Abdul-Jabbar announced a few days ago that the Dhi Qar refinery project to refine crude oil with a capacity of 100,000 barrels per day was referred to a consortium of Chinese investment companies. He said in a press statement that the Ministry of Dhi Qar Refinery will include integrated production units and will be built according to the latest technical and technological quality standards and specifications.