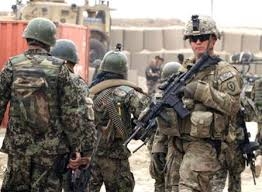 an Iraqi source revealed that Iraqi Prime Minister Mustafa Al-Kazemi will send to the United States a request from the political forces in Iraq that includes the immediate withdrawal of American forces.
The source stated, according to a report published by Prensa Latina, that “Al-Kazemi accepted the transfer of the request following the American bombing of the Popular Mobilization sites, which the public opinion described as a violation of national sovereignty.”
He added, “Hadi al-Amiri, head of the Fatah coalition, gave the prime minister a letter signed by other parliamentary blocs calling for the immediate withdrawal of US military forces from Iraq.”
Al-Kadhimi criticized the behavior of the Pentagon delegates and described the attacks on the Popular Mobilization Forces as incorrect.
And in January 2020, the Iraqi parliament approved a resolution demanding the withdrawal of foreign forces from the country, especially those from the United States.