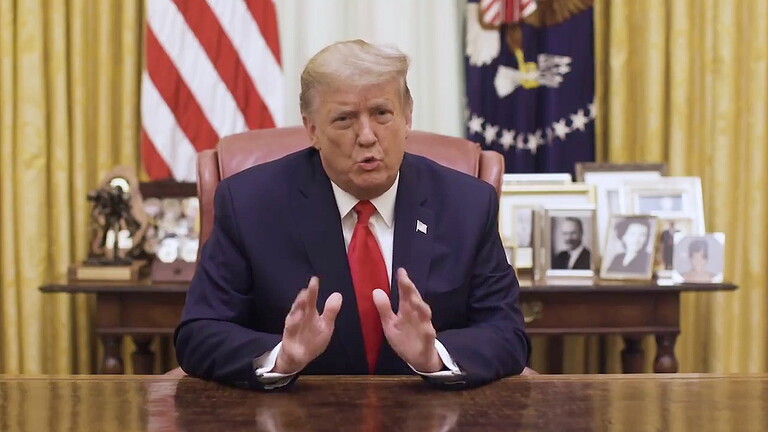 US President Donald Trump confirmed that he was “shocked and saddened” by the storming of Congress, pledging that all those involved in it would be held accountable, and said that he directed the use of all resources to impose order during the transfer of power.

Trump said, in a video speech posted on the White House account on “Twitter” on Wednesday evening, in which he did not address the issue of impeachment: “I want to be very clear, that I unanimously condemn the violence that we witnessed last week, there is absolutely no place for the violence. Sabotage in our country. It has no place in our movement. Making America great again means defending the rule of law. ”

He added, “Violence gangs challenge everything I believe in, and everything our movement defends. It is not possible for any of my true supporters to support political violence … or to show disrespect to the security services or the American flag.”

He continued, “We have witnessed political violence that has gone out of control. We have witnessed a lot of unrest, gangs, acts of intimidation and destruction. This must stop, if you are right-wing or left-wing, Democrats or Republicans. There is no justification for violence.”

He stressed that “the United States is a state of law, and those who were involved in last week’s attacks will be brought to justice.”

He stated, “There were reports that demonstrations were planned during the coming days here in Washington as well as all over the country. The US Secret Service informed me of potential threats … and has directed federal agencies to use all necessary resources to ensure order. We are transporting thousands of National Guard personnel.” To Washington to secure the city and ensure the safe and secure transfer of (authority) without any accidents. ”

Trump added that he felt “shocked and deeply saddened by the tragedy that occurred on the Capitol last week,” calling on all Americans to “move beyond the excitement of the moment.”

Trump delivered his speech a few days before the end of his term and the inauguration of the winner in the presidential elections, Democrat Joe Biden, on January 20, amid an atmosphere of security tension in the country against the backdrop of the events of the storming of Congress on January 6 that sparked a wave of anger towards the current president and led to the release of the Democrats In the House of Representatives a process for his removal.