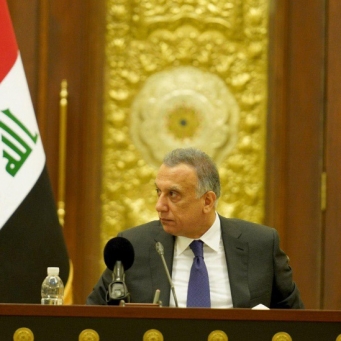 Iraqi Prime Minister Mustafa Al-Kazemi pledged to press ahead with reforms in the country even if that cost him his life, indicating that his government will reveal “major facts” about corruption during the new year.

Al-Kazemi said that his government had submitted a draft of an “ambitious” financial budget that included economic reforms, which put it in the crosshairs of “challenges and auctions.”

Al-Kazemi’s statements came during a dialogue session with a number of ministers, university professors and political analysts.

He added, “I have always confirmed that I have come to reform, and the auctions and shows will not stop me even if this cost me my life.”

Since its formation, the Al-Kazemi government has undertaken wide-ranging administrative changes in state institutions, including the security services and the army, in an effort to remove incompetent officials or those suspected of involvement in corruption.

During the formation of his government, Al-Kazemi pledged to fight widespread corruption in the joints of the state, which made him exposed to a fierce campaign by influential parties and blocs backed by Iran.

“We have established the Committee to Combat Corruption and Exceptional Crimes, and for the first time, great heads find themselves in prison, not protected by a party or influential people, and they are continuing to do so,” the Iraqi prime minister said.

“2021 will be the year of uncovering the major facts about corruption that affected the economy and development,” he pledged.

An Iraqi deputy revealed that the country’s official Public Integrity Commission had referred 333 former officials, including 20 with the rank of minister, to the judiciary with “corruption charges.”

A member of the Integrity Committee, MP Jamal Al-Muhammadawi, explained that 4 former ministers and 7 general directors have been convicted of cases related to corruption files of the Ministry of Electricity, without details on the conduct of the investigation with the rest of the accused officials.

Parliament’s Energy Committee says that every billion dollars spent on the electricity sector was enough to produce 1,000 megawatts of energy, according to the standards of the producing companies.

According to previous data of the Public Integrity Committee, corruption in electricity projects amounts to billions of dollars.

The fight against corruption was at the top of the demands of massive protests that Iraq witnessed over a whole year, starting in October 2019 when the government of former Prime Minister Adel Abdul Mahdi, in partnership with Iraqi militias affiliated with Iran, was involved in killing about 700 protesters and wounding about 20 thousand others, in order to protect the regime. Corrupt religious parties in the country.

Al-Kazemi criticized the Iraqi governments that preceded his current government that they “did not witness any development in Iraq. Rather, its industry, agriculture, education and health system were destroyed. During recent decades, the Iraqi economy has become subject to oil prices, in a weak economic environment with the spread of the epidemic and corruption.

He continued, “2020 was a difficult year for humanity with the outbreak of the Corona epidemic, the economic crisis, and security and political challenges, and in Iraq the crisis was more complex. Danger and the people lost their confidence not only in the political forces, but in the state and its institutions.

He pointed out that his government “worked from the first moment to dismantle crises and reduce their effects on our people and the future of our generations, and we kept the specter of a regional and international conflict that could have entered the Iraqi in a long series of wars.”

He pointed out that “the state has regained its health and confidence in its capabilities in the past 6 months,” noting that “the security forces have become more confident and solid and have restored their relationship with the people, and the army is today more harmonious, and is ready at any moment to protect the people against any danger.”

On the level of foreign relations, the Prime Minister said that “6 months of the work of this government was enough to ensure that Iraq enjoys the strongest system of regional and international relations and confidence in it and its government that it has not seen for decades,” noting that “all our neighbors and the whole world seek to support Iraq and cooperate for its rise from His hold.

Regarding early elections, he said, “We have made great strides in it. We now have an electoral law, a completed commission, and an election financing law, and we are left with nothing but the formation of the Federal Court that we are working on with full force.”