Washington evacuates its embassy in Baghdad of civil servants

Washington evacuates its embassy in Baghdad of civil servants 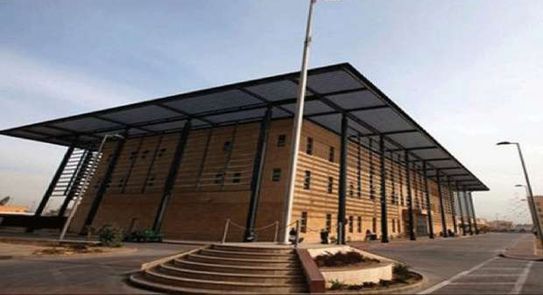 Diplomatic sources said that the United States has completed the process of evacuating civilian personnel from its embassy in Baghdad in conjunction with the return of Katyusha rockets to reappear in its vicinity, and the approaching first anniversary of the killing of Iranian General Qassem Soleimani and his Iraqi assistant Abu Mahdi al-Muhandis, the former field commander of the Popular Mobilization Forces in a US raid in January 3rd, 2020.

This month, the US embassy in Baghdad was attacked twice, using Katyusha rockets fired by Iraqi Shiite militias affiliated with Iran.

The sources indicated that part of the US embassy staff in Baghdad temporarily returned to the United States, and the other part was transferred to the safe city of Erbil in northern Iraq, while the part responsible for managing vital activities in the Iraqi capital was transferred to an alternative location.

On Wednesday, the US Central Command announced that “the recent missile attack on the Green Zone in Baghdad was almost certainly carried out by a rogue militia group backed by Iran.”

US President Donald Trump warned the Iranian regime against launching any attack targeting Americans in Iraq, with the approaching first anniversary of the assassination of Iranian General Qassem Soleimani in a US drone strike near Baghdad airport.

“Our embassy in Baghdad was hit by several missiles on Sunday,” the outgoing president wrote on Twitter, an attack that left only material damage. “Guess where it came from: from Iran,” he added.

He continued, “Now we hear talk of other attacks against Americans in Iraq,” directing “friendly advice to Iran: If one American is killed, I will hold Iran responsible.” “Think about it carefully,” he warned.

In response to Trump, Iranian Foreign Minister Mohammad Javad Zarif wrote in a tweet Thursday, “Exposing your citizens to danger abroad will not distract attention from the catastrophic failures at home.”

Zarif attached a picture of Trump’s tweets published years ago, in which he said that former President Barack Obama was going to start a war with Iran to be re-elected, and a screen image of a graphic that is supposed to reveal the degree of danger of the Corona virus pandemic in the United States.

The Iraqi Security Media Cell announced the launch of eight Katyusha rockets in the Green Zone in which the US embassy is located on Sunday night, and the embassy’s defenses intercepted the missiles.

The US Embassy and other foreign military and diplomatic sites have been targeted by dozens of missiles and IEDs since the fall of 2019.

Western and Iraqi officials held militant groups, including the pro-Iranian “Hezbollah Brigades,” responsible for the attacks.

In the aftermath, the US command in the Middle East also condemned the firing of “21 missiles almost certainly launched by Iranian-backed militia” and “which were clearly not intended to avoid civilian casualties.”

In a statement, the leadership also warned that the United States would hold Iran “responsible for the killing of any American citizen” in an attack attributed to such “rogue armed groups.”

And US Secretary of State Mike Pompeo accused Tehran of being responsible for the bombing.

The commander of US forces in the Middle East, General Frank MacKenzie, warned that his country was “ready to respond” in the event that Iran launched an attack on the first anniversary of Soleimani’s assassination.

In response, Iran urged the US authorities Monday not to create “tension”.

On January 3, 2020, Trump authorized a drone attack to assassinate the prominent Iranian general while he was in Baghdad, and this strike raised fears of escalation, but that did not happen, but tension is escalating with the approaching first anniversary of the operation, at a time when the US President entered the last weeks of his term .

Washington recently reduced its diplomatic staff in the Iraqi capital, and speculation has surfaced again in recent days about the possibility of closing the embassy permanently.

On Wednesday, a senior US administration official said that senior national security officials met at the White House and agreed on several options to deter any attack targeting US military and diplomats in Iraq.

The officials are Acting Defense Secretary Chris Miller and Pompeo and National Security Adviser Robert O’Brien, and they have agreed on a “variety of options” that will soon be brought up to Trump.

Iran continues to exploit the militias loyal to it in Iraq to carry out revenge attacks against the US presence in Iraq at a time when the Iraqi government fails to repel these violations.