Iran plans to overthrow the three presidents in Iraq

Iran plans to overthrow the three presidents in Iraq 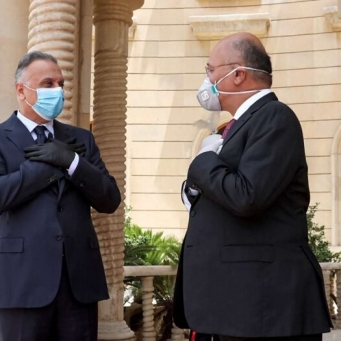 A political source in Baghdad revealed that Iran is planning to overthrow the three presidents in Iraq, ahead of the early parliamentary elections, scheduled to take place in the summer of 2021, but its ambitions are facing serious difficulties.

Iran places both Prime Minister Mustafa Al-Kazimi, President of the Republic Barham Salih and Parliament Speaker Muhammad al-Halbousi in the category of allies of Saudi Arabia and the United States of America, since its ally, former Prime Minister Adel Abdul-Mahdi, was ousted after unprecedented demonstrations that began in October 2019 and lasted for months.

The sources expect that the Iranian plan to overthrow the three presidents in Iraq will be revitalized, after the battle for the US presidential elections has yielded a winner.

The source familiar with the scenes of the political movement that has been taking place for days said, “Iran is working according to the principle of ‘what is not fully comprehended, nothing is left behind,’ meaning that it will accept any partial results resulting from this plan.”

Iran believes that the protests only toppled its ally Abdul Mahdi, and ignored Saleh and Al-Halbousi, and even installed its old opponent, Mustafa Al-Kazemi, as the new head of government.

Iranian-affiliated Iraqi politicians, analysts, and writers are publicly expressing this vision in the media and social media, and are working hard to rally the Shiite public behind this hypothesis, but to no avail.

This hypothesis developed in light of a Sunni political movement supported by Iran and Turkey to dismiss Parliament Speaker Muhammad al-Halbousi, who represents the second generation of Sunni politicians, adopts a liberal model, and is open to relations with the Arab Gulf states, the West and the United States.

The Arab project led by Khamis al-Khanjar and the Salvation Front led by Osama al-Nujaifi, supported by Turkey, and the mass party led by Ahmed al-Jubouri “Abu Mazen” supported by Nuri al-Maliki, one of Iran’s most prominent men in Iraq, joined the efforts of the Islamic party led by Rashid al-Azzawi, in order to remove Muhammad al-Halbousi, in conjunction with A green light from the Kurdish leader Masoud Barzani and Shiite leaders to replace Barham Salih and Mustafa Al-Kazemi.

The Islamic Party, the arm of the Muslim Brotherhood in Iraq, has become a reliable ally of Iran, since Rashid al-Azzawi’s accession to its highest position.

Al-Azzawi, who is a Sunni, spent nearly half his life as a refugee in Iran, married there, and built extensive relationships with Iranian political and military leaders, before returning to Iraq after 2003.

The sources say that the leader of the Badr Organization, Hadi al-Amiri, and the leader of the State of Law coalition, Nouri al-Maliki, share roles within the Iranian plan, while the former appears in the calm appearance of al-Hakim seeking calm, the second leads continuous political pressure operations to mobilize the crowd with the aim of toppling al-Halbousi first, and al-Kazimi and Saleh if possible.

Al-Maliki cannot forget that Al-Halbousi insisted on passing the election law in the multi-district formula, a formula that lies at the heart of the demands of the October protesters.

Al-Maliki wants every Iraqi governorate to be a single district so that it will be easy for him to obtain seats in the central and southern governorates, in which his fans are dispersed and cannot compete within their districts and suburbs.

Al-Maliki seeks to appease his fierce Shiite opponent, Muqtada al-Sadr, to unify the Shiite efforts against al-Halbousi, al-Kazemi and Saleh, but al-Sadr prefers to “stay on the hill” for the time being, according to observers.

For the first time in years, al-Maliki announced that he did not object to coordinating political efforts with al-Sadr, who sponsors a parliamentary bloc that includes 52 deputies, which was considered an indication of the intentions of the leader of the State of Law coalition to compromise in exchange for building an alliance against the heads of parliament, the government and the republic.

Observers say that Iran prefers to overthrow the three presidents months before the date of early elections, so that its allies can arrange their cards and regain absolute control over political life in the country.

But achieving this goal seems very difficult, given the intense entanglement in the internal and external lines.

If Barzani wants to exclude Barham Salih from the position of president of the republic because he thinks he is a personal right for his family, then the veteran Kurdish leader is a prominent ally and personal friend of Prime Minister Mustafa al-Kazemi.

Given Al-Sadr’s unclear position on Al-Kazemi, achieving a Shiite consensus to overthrow him does not seem easy, and Al-Halbousi’s close relationship with many Shiite and Kurdish political parties hinders the achievement of an understanding on his removal.