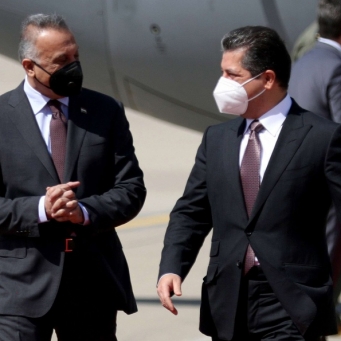 The features of a new phase of the relationship between the federal government and the authorities of the Kurdistan region of Iraq are looming in Iraq, radically different from the push and pull relationship that has characterized the relations of the two parties over the past years, due to the large number of disputes over many issues and files, especially the financial file as well as the security file and the extension of control over certain regions.

Three poles are looming in the new relationship between Baghdad and Erbil: the Iraqi government represented by Mustafa Al-Kazemi, the President of the Republic, Barham Salih, and the leadership of the Kurdistan Region of Iraq, represented in particular by the leaders of the Barzani family, the actual rulers of the region.

The intense communication between these poles resulted in unexpected agreements in terms of speedy reaching them, resolving some security issues that were considered intractable, while resolving financial disputes between Baghdad and Erbil will be the best culmination of the “new honeymoon”, according to the expression of one Iraqi politician commenting on the great developments. In the relations of the leadership of Iraqi Kurdistan with the federal government.

The same politician says that the continuation of the current path in improving relations between the two parties with the same momentum indicates the emergence of a new political alliance that can be effective in the upcoming political events, on top of which are early elections scheduled for the middle of the next year, and Prime Minister Mustafa Al-Kazemi needs him to establish his powers and push his plan for change and reform. Which most of its provisions do not appeal to his influential partners in power, especially from the Shiite parties with strong ties to Iran.

Some argue about the role of the United States in bringing Baghdad and Erbil closer together at a time when Washington needs a clearer atmosphere between them, in light of the escalation of the indirect confrontation between it and Tehran on Iraqi soil, as Iran aspires that the harassment of its Iraqi militias with the American forces will lead to Prompt the Trump administration to withdraw those forces from Iraq.

However, this scenario, which will constitute a resounding defeat for the American side, seems unthinkable, while the most that the American administration can do is to take the lands of the Iraqi Kurdistan region as an alternative headquarters for its forces withdrawing from several Iraqi regions, and this necessitates the need for a stable region in terms of security, politics and financially. As it is at the moment.

Not far from the attempts to end the stifling financial crisis in the Kurdistan region of Iraq, the idea of ​​establishing a company to manage the extraction and export of oil in the region was pushed on Tuesday.

The disagreements over the proceeds of oil produced in Iraqi Kurdistan, and the failure of Erbil to deliver them to the Iraqi state treasury, hindered the region’s access to its share of the federal state budget. It was announced recently that the region’s debt has reached nearly $ 28 billion, a large number that reflects the size of the financial crisis.

And Iraqi Oil Minister Ihssan Abdul Jabbar said that the approaches of the Kurdistan Regional Government negotiator “are in harmony with the directions of the federal government to reach a formula for constitutional solutions to disputes over the production and export of crude oil in the region.”

On the security side of the ongoing consensus, the security and military leaderships of the Iraqi federal government and the Kurdistan region of Iraq agreed, on Tuesday, to start opening two main joint security coordination centers in Baghdad and Erbil.

A statement by the Iraqi Joint Operations Command stated that the leadership hosted the third meeting of the Military Coordination Committee and the joint security work between the federal government and the Kurdistan Regional Government to discuss issues of common security concern along the line separating the federal forces and the regional guards, with the aim of identifying the nature of security threats and pursuing the remnants of ISIS gangs.

Iraqi sources said that Baghdad may be in the process of changing its position on the presence of Kurdish Peshmerga forces in Kirkuk, after those forces were removed from the disputed governorate in 2017 after the Iraqi Kurds organized a referendum on the independence of their region.

Such consensuses between the governments of Baghdad and Erbil anger the leaders and symbols of the pro-Iran camp for fear that Al-Kazemi’s affinity with the Kurdish leaders will be at their expense, in the interest of the United States, and against Tehran’s influence in the country.

Commenting on a recent agreement between Baghdad and Erbil that stipulated ending the presence of armed groups in the Sinjar district, west of Mosul, including the presence of the Popular Mobilization Militia, Qais Khazali, leader of the Asaib Ahl al-Haq militia, said that the aforementioned agreement is a “political courtesy and electoral reward.”