Are Clinton’s letters preparing for the trial of former Obama administration officials?

Are Clinton’s letters preparing for the trial of former Obama administration officials? 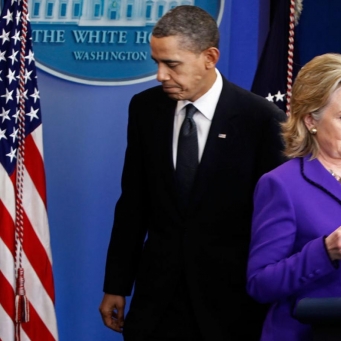 A day after US President Donald Trump expressed his dissatisfaction with his administration’s delay in publishing nearly 33,000 e-mails for Hillary Clinton, Secretary of State Mike Pompeo, on Friday, revived the issue circulating for four years with his pledge to release these messages ahead of the November elections. Next, following accusations by the former Obama administration official of using her personal mail to receive classified information.

This step comes on the eve of the presidential election in which the Corona virus has become a heavy guest for the Trump administration, which is aspiring to seize a second term, while Pompeo revealed, in an interview yesterday, that the e-mail messages of the former Secretary of State will be published before the elections, but he is from It is not yet clear if this indicates the deleted messages.

Observers say that the Republican president’s delay in opinion polls was behind his eagerness to direct the public opinion’s compass from the Corona virus to Clinton’s messages, as one day after Trump expressed in “Fox News” his dissatisfaction with the way the State Department dealt with this file Mike Pompeo peered at the same channel, announcing his department’s intention to unveil the emails.

why now? Does this affect the election of Joe Biden? Legitimate and reasonable questions; Given that the Democratic candidate was the second man in the previous administration for eight years, and even the “New York Times” newspaper said that the move to uncover emails that are expected to cause widespread confusion in the American street came at a time when Attorney General William Barr resisted Presidential pressure to prosecute Democrats, such as former Vice President Biden.

Observers consider that the incitement of the Clinton archive at this time is an attempt by the current administration to restore balance in the fortunes of the elections, given previous speculation that after the organizing committee’s decision to cancel the second presidential debate, Trump wasted an opportunity to establish his feet in the White House, at a time In which the Democratic candidate is ahead in public opinion polls.

Trump had urged Attorney General Bill Barr this week to indict Democrats linked to the investigation into Russian interference in the 2016 elections and any connection to his campaign, and specifically mentioned Biden and Barack Obama, but the attorney general told Republicans and others that he did not plan to reconsider the investigation about Moscow enters before election day.

Three government sources familiar with the investigation revealed that it is unlikely that John Durham, who has been tasked with investigating allegations of Russian collusion with Trump’s campaign, will submit indictments or any new developments that could affect the course of the upcoming elections.

According to the “New York Times”, Trump had hoped that the Durham investigation would provide him with evidence that the Russian investigation was just an attempt to discredit him, leading to indictments being brought against former senior national security officials in the Obama administration, and the former president and vice president themselves, and he did not stop. The matter at that, but the master of the White House wanted to obtain a report with the approval of the Ministry of Justice detailing their movements in 2016.

The roots of suspicion of the “Clinton letters”

The Trump administration’s efforts to uncover emails began years ago in the aftermath of the election battle, when Republican candidate Hillary Clinton was accused of deleting thousands of emails that were raised to have been sent from a personal server.

Secretary of State Mike Pompeo, who is considered the second man to hold this ministerial era under Trump, is leading the file for releasing the information contained in Clinton’s private mail so that the American people can read it, given that the former minister’s behavior in circulating classified information with a personal servant is considered behavior. Not acceptable for internal and external security reasons.

National security risks are at the top of the list of consequences of the action that Clinton is accused of; As the presence of government information in private servers makes it an easy prey for foreign penetration, this is at a time when warnings of US intelligence officials from outside parties trying to destabilize the democratic process are almost familiar in Washington, and the National Center for Counterintelligence also issues periodic notifications, stating Russian, Chinese and Iranian attempts To tip one candidate over another.

In the same context, Pompeo indicated in the televised meeting yesterday that Russia, China, Iran and North Koreans want to obtain this type of information, and stressed, “The confidential information must remain in the appropriate places,” accusing Clinton of not taking into account these threats when she was on Head of the Ministry of Foreign Affairs.

What is the Freedom of Information Act?

The release of these letters is likely to be under the US Freedom of Information Act (FOIA), a federal law that generally states that “everyone has the right to request access to federal agency records, except for the limits of records protected from disclosure that fall within the nine exemptions. Contained in the law or within any of the three exceptions to the Law Enforcement Register.

The federal law, which is highly popular in the United States, after the circulation of e-mails in Arab circles, to Hillary Clinton and her staff and foreign policy officials in the Obama administration, through a site alleged to be affiliated with the US State Department under the name of the Freedom of Information Act, and stamped the messages as confidential, but he It is not known yet the correctness or reliability of the site

In addition, Pompeo said that he does not expect Trump to declassify any documents that may contain sensitive information that could harm US interests once they are published. “We will release the information that must be published. We will do it in a way that protects the intelligence sources that we need to protect. ”

What are the results of government investigations?

Although Trump heads the executive branch, the “New York Times” reported, the government has rejected the demands of the “Godechal Watch” – a conservative American group founded in 1994 that is filing lawsuits under the Freedom of Information Act to investigate alleged misconduct by government officials – hand over Emails from the Clinton server, including letters she exchanged with Obama, which justifies Trump’s criticism of his Secretary of State, Mike Pompeo, and Attorney General, Attorney General Bill Barr.

An investigation by the US State Department in October 2019 revealed that there was no “convincing evidence” of mishandling of classified information, and James Comey, the then FBI director, said twice in 2016 that Clinton should not. She faces criminal charges for using a private servant, but he nonetheless rebuked her and her assistants in July of that year for neglecting to deal with confidential information.

Trump had repeatedly attacked his presidential rival in 2016, and finally sought to pressure senior officials to take steps to harm his political opponents, while intelligence director John Ratcliffe and Attorney General Bill Barr committed to presenting a series of declassified documents to Republicans in the Senate and others, targeting FBI investigation into Russia’s interference in the last election.