Trump is pressing and Pompeo responds .. Soon Hillary Clinton emails will be released

Trump is pressing and Pompeo responds .. Soon Hillary Clinton emails will be released 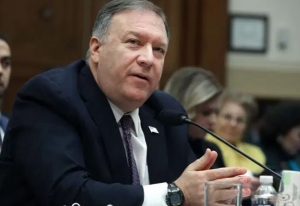 US Secretary of State Mike Pompeo has pledged to publish controversial emails of Democrat Hillary Clinton – messages the presidential camp says will prove she should be prosecuted.

On Thursday, President Donald Trump leveled rare criticism of two of his closest aides, Pompeo and Attorney General Bill Barr, less than a month before the presidential election.

In a phone interview with Fox Business, Trump, who was forced to suspend his election campaign due to his COVID-19 infection, demanded that the two ministers take measures regarding the administration of his predecessor, Barack Obama.

Trump said Pompeo should find a way to spread emails from Hillary Clinton, the Democratic nominee in the previous 2016 presidential election, which Republican activists criticizing for her use of a private servant while she was secretary of state are demanding.

Republicans criticize Hillary Clinton’s use of a private servant when she was Secretary of State (Reuters).
In response to a question about the US President’s attack on him, Pompeo told Fox News, “We will publish this information so that the Americans can see it.”

When asked if he would do so before the presidential election on November 3, Pompeo added, “We are doing it as quickly as possible. I totally think we will see more before the elections. ”

Trump said the emails were at the State Department but Pompeo was unable to get them out, which is “very sad actually.”