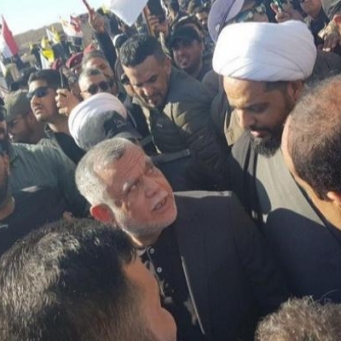 A British website revealed that the United States of America has put together a list of 80 sites in Iraq related to pro-Iranian militias planning to target them if it goes ahead with its threat to close its embassy in Baghdad.

The British “Middle East Eye” website stated that these sites include secret headquarters and shelters used by Hadi al-Omari and Qais Khazali, leaders of the Badr Organization and Asa’ib Ahl al-Haq, as well as sites belonging to the Iraqi Hezbollah Brigades.

The three armed groups are backed by Tehran, and are also considered part of the Popular Mobilization Forces and are under the nominal control of the Iraqi government.

Political leaders and leaders of armed groups told Middle East Eye that US Secretary of State Mike Pompeo shared hundreds of satellite images of the 80 websites with Iraqi President Barham Salih during a telephone conversation on September 20.

Baghdad reassures the missions … warnings of “instruments without balance”
Pompeo also informed Saleh of Washington’s plans to close its embassy unless the Iraqi government takes measures to stop attacks targeting the Green Zone, where the embassy building is located, and the convoys that deliver supplies to American and international forces in other regions Inside Iraq.

A prominent Shiite politician, who asked not to be named, told Middle East Eye: “The message of the Americans is clear. If you do not act, we will act. ”He added,“ Allowing this to happen means an open war in Baghdad, and America’s exit means that this war is imminent. ”

“Middle East Eye” requested the US State Department to comment on the matter, but without receiving a response at the time of publication.

The State Department has not released the transcript of Pompeo’s call with Saleh, as it usually does when the secretary speaks to foreign officials.

Pompeo’s threat caused panic in Baghdad. Supporters of the Mustafa al-Kazemi government had not imagined that this major international ally would quickly abandon the prime minister, who was warmly received at the White House in August.

They fear that suspending the US embassy may lead to repercussions that include the withdrawal of diplomatic missions, a political and economic collapse, and the outbreak of sectarian and ethnic divisions.

“All indications are that we are heading towards a strong storm,” said a senior Iraqi official familiar with the discussions, who asked not to be named. The withdrawal of the Americans means an economic collapse within two weeks, followed by a political collapse within two or three months, then a security breakdown, and the fall of the government.

According to the source, US officials are concerned about the possibility of an imminent attack on the embassy by pro-Iranian groups ahead of the presidential elections expected in November. “To embarrass Trump.”

He added, “They did not say that there is a plan or information confirming these concerns. The problem is that they require guarantees to secure the embassy (and) this is very difficult in light of the current circumstances. ”

The day after Pompeo called, Saleh summoned: Al-Kazemi, Mohamed Al-Halbousi, Speaker of Parliament, and Faik Zaidan, President of the Judicial Council of the Supreme Court. To hold a meeting to discuss the government’s response.

For his part, Ahmed Al-Sahhaf, a spokesman for the Iraqi Foreign Ministry, said Hussein carried a “verbal message” from Al-Kazemi to Iranian President Hassan Rouhani, “which focused on developments in the region and the expected possibilities and their repercussions.”

However, the head of the Shiite political bloc familiar with the talks told Middle East Eye: “All that al-Kazemi asked of Iran was a 40-day truce. They said that they do not support any attacks targeting diplomatic missions, and that the Iraqi government should take measures to prevent similar attacks. But are they serious about easing tensions or not ?, That is the question.