Al-Kazemi criticizes opponents of the American presence in Iraq: “They went to the White House to topple Saddam.”

Al-Kazemi criticizes opponents of the American presence in Iraq: “They went to the White House to topple Saddam.” 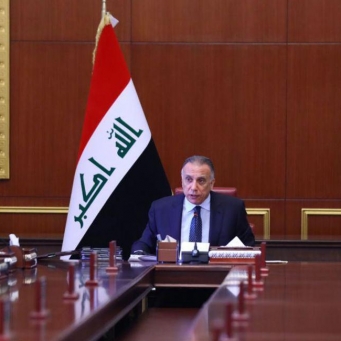 On Saturday, Iraqi Prime Minister Mustafa Al-Kazemi criticized the forces and factions close to Iran, which are calling for the exit of US forces from Iraq, reminding in his first television interview, since his government gained confidence, last May, that some had previously gone to The United States of America to get rid of the rule of the late Iraqi President Saddam Hussein, whose rule of the country ended with the American occupation in 2003.

Al-Kazemi addressed the opponents of the American presence by saying, “You went to the White House and asked to topple Saddam Hussein.” In an interview with the (official) Al-Iraqiya News Channel, he added, “There are those who bid on relations between Iraq and the United States of America, but some of them went to the White House seeking salvation From Saddam Hussein’s regime. ”

He asked, “Why this coup?”, Explaining that “some politicians openly oppose America, and subjugate it in secret.”

The Iraqi Prime Minister pointed out that his government “came for the sake of a solution, not to create crises,” noting that the Americans helped the Iraqis get rid of Saddam Hussein’s rule.

He pointed out that Washington had also provided assistance to Iraq in the war against the terrorist organization “ISIS”, stressing “the need not to be ashamed of any relationship in which an interest for the Iraqis is achieved, whether it is with the United States of America, Iran, or Saudi Arabia.”

Al-Kazemi stressed that his country “will not be in isolation, but will work to communicate with everyone,” considering that some forces and groups that he did not name “repeat the same mistakes of the past.”

He stressed “the need to protect the interests of Iraq with the United States of America in the areas of security, health, education and economy,” noting “the presence of those who want to obstruct Baghdad’s relations with Washington.”

He pledged that his government was serious about the issue of protecting foreign missions in Iraq, pointing to the presence of “non-state forces”, groups of corruption and fugitive weapons.

For days, the Iraqi government has been making intensive efforts to persuade the United States of America to reverse its decision to move its embassy in Iraq from Baghdad to Erbil, against the background of the attacks on foreign missions and interests, especially the US, in Iraq, which accuses pro-Iranian factions of being behind them.

In this regard, Iraqi President Barham Salih met, on Saturday, with the Iranian ambassador in Baghdad Iraj Masjedi, and discussed with him the security of foreign missions in Iraq, according to a presidential statement indicating that the meeting “emphasized the need to support the (Iraqi) government’s measures in protecting diplomatic missions and consolidating The authority of the state and law enforcement, and the indication that stability in Iraq and overcoming regional crises is important and necessary to achieve peace and move towards opportunities for development and joint cooperation.

For his part, the Iranian ambassador affirmed “Tehran’s commitment to supporting the stability of Iraq and strengthening economic and social ties between the two neighboring countries and peoples.”