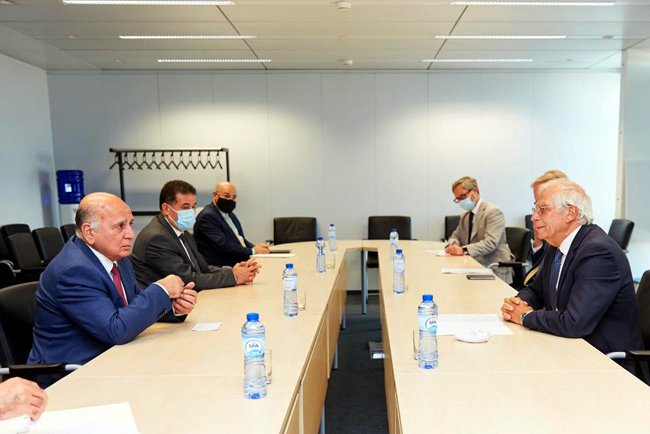 Foreign Minister Fouad Hussein met with the High Representative for Foreign Affairs and Security Policy of the European Union Josep Borrell at the European Commission headquarters in Brussels.

The minister valued, according to a foreign ministry statement, “the European Union’s positions in support of Iraq in the various developmental fields and in the field of humanitarian aid,” praising “the Union’s keenness to provide political and economic support to Iraq, especially its assistance in the field of confronting the Corona pandemic and limiting its spread.”

The minister affirmed, “Iraq’s commitment to the principle of respecting the sovereignty of states and non-interference in their internal affairs, expressing absolute rejection of Iraq turning into an arena for conflict between the competing parties, or a starting point for aggression against any other country, stressing the need to support Iraq’s efforts to be a factor of stability, and agree in Region and the world. ”

The statement continued, “The minister also touched on the government’s decision to hold early elections next June, and its aspiration to cooperate with international parties interested in this matter. The two sides discussed the issue of removing Iraq from the European Commission’s list of high-risk countries in the field of money laundering and terrorist financing, again inviting the parties. The concerned commission in the commission to speed up the opening of a dialogue with the concerned technical authorities in Iraq, in order to complete the evaluation of Iraq’s performance in this field, and remove its name from this list.

The statement concluded, “Hussein invited Borrell to visit Iraq at the earliest possible opportunity to discuss means of strengthening bilateral relations between the two sides.”