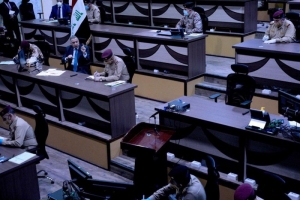 BAGHDAD – Iraqi Prime Minister Mustafa Al-Kazemi has formed a special committee to investigate corruption files and major cases, directing to grant it exceptional powers, in the first indication by the prime minister of his intention to confront the big whales in his country.

Given the composition of the new committee, and the security authority that will carry out the tasks of chasing and arresting the corrupt, it seems that there is a real intention to target figures who may be from the first row.

Al-Kazemi assigned the human rights team, Ahmed Taha Hashem, who previously served in high-ranking intelligence sites within the Ministry of Interior, to head the Special Investigations Committee. He is supported by a senior official in the intelligence service, provided that the Counter-Terrorism Service, led by General Abdel Wahhab Al-Saadi, who is popular after the defeat of ISIS, will take over the task of implementing judicial arrest warrants against wanted corrupt individuals, if issued.

Al-Kazemi strengthened the committee with representatives of other oversight and security agencies, while supporting it with a large number of employees.

According to the order that bore the signature of Al-Kazemi, the Special Investigation Committee has the right to summon any Iraqi to give his testimony, except for those who were actually accused in a fundamental way in a case that falls within the powers of this committee, as these are treated through the judiciary.

According to interpretations of experts in law and procedural issues, this committee can summon all former heads of the republic, government and parliament, along with all ministers, officials, employees, politicians, merchants and businessmen, who are not officially accused of corruption cases.

The committee also has the right to open any closed corruption file against any person, and to investigate former defendants who have been acquitted, convicted, or are still under review, provided that judicial orders are issued to do so, to prevent interfering investigations.

The news of the announcement of the formation of this committee, especially its composition, sparked an enthusiastic reaction on social networking sites, where many bloggers saw that the actual war on the corrupt in Iraq had already begun.

General Al-Saadi, the commander of the US-armed counterterrorism service, is one of the main opponents of the pro-Iranian militias and politicians close to Tehran, and observers see his assignment of this type of mission as an indication of the approaching confrontation.

Professor of Political Science at Baghdad University Ihssan Al-Shammari believes that “mandating the Counter-Terrorism Service to implement decisions related to corruption cases is an indication of armed friction with leaders and mafias of corruption.”

Observers place this development in the context of urging the countries of the region and the world to urge Iraq to confront the militias loyal to Iran and to put an end to its dominance over the country’s political, security and economic decisions.

Political analyst Ahmed Al-Abyadh says that the zero hour seems to have approached a lot in Iraq, pointing to the link between these developments and the visit by French President Emmanuel Macron to Iraq.

Al-Abyadh added that the visit of the French President can be translated as “a mediator to convey the final warning to the militias.”

“Now the difficult test for Al-Kazemi’s seriousness has begun to impose the prestige of the state,” he explained.

Al-Kazemi’s government previously had contact with former Prime Minister Nuri al-Maliki, through one of his in-laws, when it issued a decision to freeze his properties after he exploited state property in an unorthodox manner.

Al-Maliki is among the most prominent targets that the angry Iraqi street demands to pursue, for causing a third of the country’s lands to fall at the hands of ISIS militants in the last year of his eight years of rule, in addition to his responsibility for the theft and squandering of about a thousand billion dollars between 2006 and 2014.

However, Al-Kazemi’s efforts in pursuing senior corrupt individuals are surrounded by many doubts, due to the political immunity they enjoy, and most of them close ties to Tehran, which is able to move its armed militias inside Iraq to confuse the situation.

Therefore, observers suspend their expectations regarding the seriousness of any legal campaign to prosecute the corrupt to the extent of the readiness of the Iraqi armed forces for a direct confrontation with the Iranian militias that protect them, which could be revealed in the next few months.