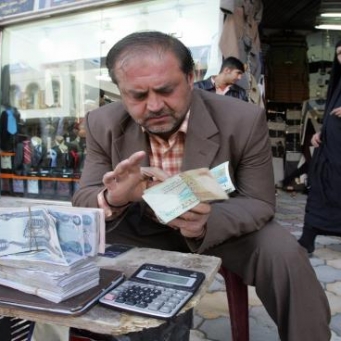 A source close to the office of the Iraqi Prime Minister revealed that the government is considering reducing the value of the dinar against foreign currencies, as part of measures to confront the financial crisis caused by the drop in oil prices and the repercussions of the spread of the new Corona virus.

The source said in a special statement to “Al-Arabi Al-Jadeed” that “the options available to Prime Minister Mustafa Al-Kazemi are mostly difficult, but there are serious dialogues with advisers and economic experts, and during the past few days, several options were presented to confront the financial crisis, including external borrowing or the devaluation of the dinar.”

He added: “There are also other options, including offering state factories and public properties for investment or sale, and printing the currency, but these will be the last options.”

He continued: “All options presented have major problems in the long and medium term, but the alternative is the inability to pay the salaries.” He pointed out that in the short term he will rely on the monetary reserve for a few months, while taking a series of austerity measures unprecedented at the state level.

The current crisis is the biggest challenge for the new Prime Minister’s government, as Iraq is one of the “mono-economy” countries, because it relied on 94% of oil sales revenues to provide salaries for employees and retirees of about 4 trillion dinars per month (about 3 billion dollars) at a time that did not reach Oil revenues have only about 1.4 billion dollars last April, according to official data.

A member of the House of Representatives, Amer Al-Fayez, told Al-Arabi Al-Jadeed that “the economic pressures on Iraq have accumulated due to the closure of business and trade facilities and financial life, due to the events that occurred at the oil level, in addition to the Corona pandemic, while the country primarily suffers from a structural defect represented in Its dependence on oil only. ”

Al-Fayez added that “oil is the source of the entry of the US dollar into Iraq, which is the force behind the dinar, but its absence means that Iraq cannot finance.” He continued, “Al-Kazemi’s mission is very difficult and complicated because of the heavy legacy left by the previous government (the government of Adel Abdul-Mahdi).”

Iraq had faced an economic collapse in prices between 2014 and 2016, but it did not witness the current significant decline in global oil demand, especially from China, the main importer from Iraq.

The economic expert, Salam Smeism, said that Iraq relied during the financial crises that it went through during the past years on the austerity policy, to reset the priorities, including the salaries of employees, wages and health allocations, but the current financial situation is more severe, especially with the decline in oil prices and the effects of corona .

“It is necessary to review some of the country’s internal laws, such as the salaries of influential personalities in the state, specifically that earn more than one salary, as it is not reasonable that the country is experiencing a suffocating crisis and there are employees who receive six salaries, especially those known as those with special degrees,” she added. .