The Iraqi dinar is falling apart: Corruption and Corona are jumping in dollars

The Iraqi dinar is falling apart: Corruption and Corona are jumping in dollars 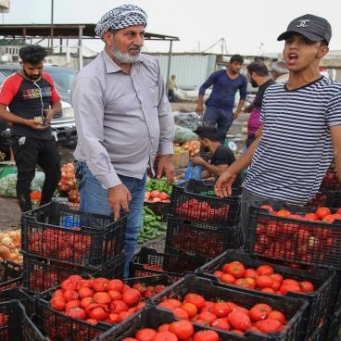 The turmoil in the Iraqi dinar exchange rate against the dollar recently led to negative effects, which directly affected the business sector and commodities in the markets, which led to the loss of confidence of dealers and investors in the monetary authority.

The decline of the dinar came after the Central Bank of Iraq stopped its activities related to pumping liquidity in foreign exchange to meet the needs of banks and their customers, as it was pumping an average of 140 million dollars or more per day to maintain the value of the currency and support its stability, and stopping the pumping of liquidity led to a jump in the exchange rate of one dollar from 1200 to 1280 Iraqi dinars, amid warnings of the continuation of this rise due to the curfew imposed by the authorities as part of the procedures to face the outbreak of the Corona epidemic.

In the midst of the financial crisis experienced by the world in general and Iraq in particular in light of the collapse of oil prices and the large deficit in the budget for 2020, the government faces great economic challenges, most notably the difficulty that the central bank can maintain the value of the dinar against the dollar because of the corrupt control of the auction of selling currency, according to What officials and economists see.

In an interview with “The New Arab,” an official in the caretaker government said that “the central bank cannot maintain the value of the Iraqi dinar against the dollar by continuing to pump the hard currency to the market, because of the lack of public revenues due to weak demand for oil and the decline in its price.” That “the central bank will have to legalize the sale of the currency for a certain period until oil prices rise again.”

And Iraq, the second largest producer of crude oil in the Organization of Petroleum Exporting Countries (OPEC), with an average daily production of 4.5 million barrels per day.

The official, who preferred to remain anonymous, added that “continuing to hold auctions to sell currency and pump tens of millions of dollars per day to preserve the value of the dinar leads to great risks for the country’s economy, and it is better for the central bank to cancel the currency auction and install its local currency, since most of the beneficiaries are Of these auctions are not businessmen and merchants, but banks, banks and private sector companies dominating the market, a large part of which has been transferred out of Iraq.

He pointed out that the central bank has succeeded in recent years in achieving the stability of the dinar exchange rate and improving it in relation to the dollar and other currencies by stabilizing the price of the local currency and defending it, but the current collapse in oil prices, and consequently, the country’s financial returns are completely different from the crises of past years.

According to the official, “There are daily discussions to reach a road map that enables the country to maintain an acceptable exchange secret of the dinar against the dollar.”

The central bank sells between 140 and 160 million dollars to public and private companies and banks, as part of a plan adopted since 2004 to control the exchange rate of the dinar and prevent its collapse in the market. The central bank only allows companies and limited banks to enter the auction and buy dollars, amounting to less than 50 banks and financial companies that are licensed by the central bank, all of which are private or private.

For his part, Professor of International Economic Relations at the Iraqi University, Abdul Rahman Al-Mashhadani, said in an interview with “The New Arab” that “canceling the currency auction is very difficult, because the goal of the currency window is to finance imports in the private sector.”

According to Al-Mashhadani, 90% of the country’s consumer needs are secured by import by the private sector, which means that canceling the currency auction will lead to a major disruption in the prices of imported goods.

Al-Mashhadani stressed that “the currency auction is a drain on foreign exchange due to its association with prominent political figures,” pointing out that 15% of Central Bank sales through the auction go as money laundering in various ways and methods and are transferred outside of Iraq.

He pointed out that the best way for the central bank to follow is to legalize the sale of hard currency as much as possible to maintain the value of the dinar and foreign exchange reserves.

For its part, Ayat Muzaffar, a member of the Iraqi parliament from the “victory” coalition led by former Prime Minister Haider al-Abadi, attributed the causes of the economic collapse and the value of the dinar against the dollar to the wrong financial policies pursued by the Adel Abdul-Mahdi government.

Muzaffar said, in an interview with the “New Arab”, that “bad management and fiscal policy floundering the head of the caretaker government, Adel Abdul Mahdi, and its indiscriminate spending on the state budget, is one of the main reasons that led to the economic collapse of Iraq, and to an unprecedented financial deficit is expected to It is, if oil prices continue to decline, about 80 trillion dinars.

She added that “the government’s flop seemed clear when the head of the crisis cell talked about the possibility of Iraq resorting to printing the currency.” An easy amount until there are surplus sums that increase the demand for goods and services so that the producers increase the production.

As for the other reason, according to Muzaffar, the printed currency must be equal to the national product, while stressing the need to preserve the monetary reserve of the central bank through its reliance on a flexible policy that takes into account the emerging political and economic conditions of the country.

And at the end of last March, the rapporteur of the Parliamentary Finance Committee, Ahmed Al-Saffar, said that “the central bank reserves reached 87 billion dollars, and it does not include cash and foreign currency only, but it includes gold bars.”