The Federal Court issues its decision on the largest bloc

The Federal Court issues its decision on the largest bloc 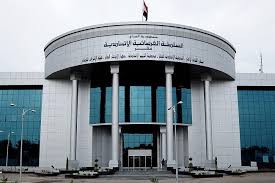 On Sunday, the Federal Court issued its decision regarding the request of the President of the Republic, Barham Salih, regarding the largest bloc.

“The President of the Republic asked the Supreme Federal Court to determine the largest bloc mentioned in Article (76) of the Constitution of the Republic of Iraq for the year 2005,” indicating that “the court received the request on Thursday, 12/19/ 2019), and accordingly the court held a hearing to consider the application, on the morning of Sunday, 22/12/2019, with all its members.

He added, “The wisdom issued the following decision (placing the request listed above form subject to scrutiny and deliberation by the Federal Supreme Court in its session held on the date of 12/22/2019 and reached after deliberation and scrutiny and after referring to the priorities for its interpretation of the provision of Article (76) of the Constitution of the Republic of Iraq for the year 2005 and that In accordance with its decision issued on the date of 25/3/2010 with the number (25 / federal / 2010), which it affirmed by its decision issued on 11/8/2014 with the number (45 / d / 2014 /) and their contents, the expression (the largest number of parliamentary bloc) mentioned in Article (76) of the constitution means either the bloc that was formed after the elections through one electoral list, or the bloc After the elections, it consisted of two or more lists from the electoral lists and entered the House of Representatives and became its seats after entering the Council and its members took the oath in the first session that is more numerous than the rest of the blocs, then the President of the Republic assigns its candidate to form a cabinet in accordance with the provisions of Article (76) of the Constitution and during the period Specified in it. ”