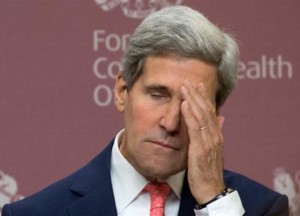 In the current April 5, John Kerry said in a statement that Iran has become less dangerous than it was thanks to the nuclear deal with President ObamaHe pointed out it is worth the reward as a result of its commitment to the agreement, and it is fair to get what you deserve in this area. But after meeting with GCC foreign ministers of countries in Manama on Thursday, Kerry heard the words , and clear about the growing Iranian threat and the continued development of Tehran ‘s missile of its program and the continuation of its interventions in the region.
Although Kerry ‘s recognition of these facts , but the response to it was just a maneuver of words , when he said: “no one leaves the other challenges posed by Iran suddenly disappear completely,”
Iran responded to Kerry ‘s remarks about the openness of the country to carry out a “new arrangements” regarding the ballistic missiles , saying that “nonsense.” The fact that the Iranian side was right to describe the words of US Secretary of State John Kerry nonsense very simple reason that Kerry , who headed the negotiating delegation , which reach a nuclear agreement with Iran which had been waived by himself at the last minute inexplicably is agreed to change the wording of Security Council resolution World No. 1929 of 2010 , which obliges Iran not to carry out any activities related to ballistic missile designed to be capable of carrying nuclear warheads, to become a non – binding later under resolution 2231 , which was prepared to cover the nuclear deal.
how and on what basis are expected him to change this it? Is it expected Iran to respond to his request naively unless it is for a price? Something that the American administration has been paid from the pocket of other whenever our skin to contest for talks or negotiations or its diplomatic engagement or political arrangements!
Add to that event of any inconsistency experienced by John Kerry , who describes today ‘s Iran as less dangerous then says to his allies in the next day he open to “new arrangements” to deal with the danger, stripped the man has no credibility qualify him for the task.
Interestingly , in the subject that at a time when Kerry is trying to market nuclear agreement with Iran as a full success for Obama, the US Congress is currently investigating whether the management Obama has misled lawmakers about the size of the concessions that have been submitted to Iran, and whether the US administration is now illegally with the help of Iran to avoid US especially financial ones penalties for Iranian trade the movements in US dollars, in the contradiction between what the administration had promised by Congress when reaching a nuclear agreement.
Ali Hussein Bakir