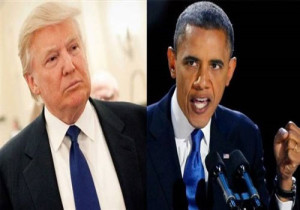 One confused to know how a global power like the United States with what claims to carry the values ​​and principles that people secrete a level of Donald Trump, Not only once the formal participation in the presidential elections, but up to the advanced stages of them.
Imagine how it would be the situation if such a person is sitting in the White House, and make decisions do not affect the status of Americans only, but the entire world! But the question that arises in this context the fact, is, “How could such a person access and why?”, The answer lies in the person of Obama himself.
Trump is the natural result of both internal and external nonsense practiced by Obama over seven years. As Obama himself is the answer to the policies of Bush Jr. (as Obama asserts himself), it is natural to accept the application of the same interpretation of it too.
Main slogan for the campaign, Donald Trump is “to make a great American again,” a slogan that attract a huge number of voters, despite the racist and hostile attitudes and even fascism, brought by Donald Trump at large “other”, which does not belong to the “white man” circle which It represents.
The only explanation for such a slogan to attract a wide cross-section of Americans, is the sense that the United States is no longer great as it was, which is understandable in light of the fact that passive, vulnerable and poor policies of Obama over the past seven years, the internal and external level.
Did not lead Obama’s policy on the slogan “Do not do anything foolish” or “do not commit stupid act” At reference to the policies of Bush Jr. Alsabakh- only bullying opponents and enemies around the world, the loss of confidence of partners and allies, and the accumulation of problems and challenges.
It seemed that Obama’s slogan “Do not do anything foolish,” in fact has turned to “do nothing at all”, which did not deny the outcome according to many recipe naive, weakness and defeatism and utilitarian for Obama’s policies.
It seemed that Obama’s focus was limited during the past years not to approach the mines and bombs ticking, rather than the exchange of time and effort to dismantle, has ended up in this politics that exploded many of these bombs around the world, which led to the United States, the appearance of appearance hesitant weak state impotent.
As well as the promises Obama has made with his arrival at the White House ended in disaster in Syria, Iraq, Yemen, Ukraine, and China Sea, and many other places around the world. It seems that it will hand over power to those after him, and the world worse off than it was before his arrival to power the White House.
This On the external front, while on the domestic level, the issue is not as bad, as the United States Hht under Obama skirmishes partisan unprecedented at all, arrived somewhat disabling the country’s official institutions on several occasions, it also reinforced the tendency of authoritarian and inventory decision-making process in the narrow circle of close advisers at the expense of other official positions in an unprecedented way, prompting the largest number of officials officials to resign on his watch, because they were not able to justify his policies, as well as to continue to accept the way accout with them.
On the economic front, it has for some it seems that the economic situation of the United States is improving, but it should be mentioned along with the other fact is that Obama will leave the White House with US $ 20 trillion is the total volume of public debt, almost half of them during his reign. This means that the US public debt has doubled in the era of Obama, compared to what it was during the Bush era Son!
There is no doubt when we take all these American internal and external data through the era of Obama in mind, plus images such as a mockery of countries such as Cuba, the US President, and the zest of other countries such as Iran media offended the sailors who had been held to it, and ignore countries like Russia and China for the site and the role of the United States in world, it is very natural that attracts Trump then the slogan “Let’s make America great again,” millions of people feel that America is no longer great.
In spite of these facts, Obama naively insist that it is not responsible for the secretion of “Donald Trump”, and that the presence of someone like Trump under the lights caused by the collapse of the Republican Party and declared bankrupt.
Obama’s words in this context by the collapse of the Republican Party may be true, perhaps partially, but Trump’s never been a Republican at all, but it was closer to the Democrats, very close to many of the leaders, did not join the Republican Party, but by a very short period of start of the election, because he saw this as an opportunity more than it is an expression of party affiliation.
The Republicans themselves they see as intrusive and subversive to the values ​​of their party. But even if we ignore all this talk, it is said that the Democratic Party put better off today ?! Will Sanders Mitraha scene for this party for the US presidency is a spectacle disease ?!
Ali Hussein Bakir