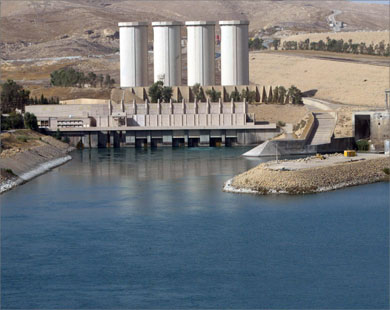 It seems that the risk of collapse of the Mosul Dam has reached its peak. According to sources from within the US embassy in Baghdad, it At the end of last month, has ended its preparations and put three contingency plans to evacuate employees of its embassy and its citizens, which the more than thirty thousand, in addition to the nationals and employees of Western embassies again in Baghdad. Preparations that started since September last September when indicated specialized reports to a Altaksvat ground under the walls of the dam to the advanced stages led to the growing cracks in the walls, and on the track formed embassy crisis cell of specialists meets every week to inspect and assess the latest developments, and was one of the recommendations to send team diving specialist from the US Navy personnel to dive to the bottom of the dam and preview Altaksvat and cracks closely, and then concluded that the crisis cell in the final recommendations to the need to prepare for the scenario of collapse and develop contingency plans to evacuate its employees and their nationals from Iraq 0

Scenario of collapse
Above all we must not forget that if the connector plug is Like Iraq in general, which eroded and breaks down rapidly as a result of the crises that accumulate it in 13 years. The collapse of this dam will serve as the worst humanitarian disaster occur over the history of Iraq and that it is possible to end the existence of Iraq as a country is based. According to the figures, the study by Dams and Water Resources Research Center at the University of Mosul made in the technology of water XIII World Congress which was held in Egypt in 2009, indicated that in the case of the collapse of the dam, the 207 632 cubic meters of water will flow quickly 3.5 kilometers per second and at 25.3 meters in nine early hours of the disaster, an exhibition of more than half of the city of Mosul to the drowning water reaches a height of 20 meters (1).
The human and economic disaster not only will not include Mosul, the figures indicate that the outcome of the disaster will lead to the deaths and the displacement of more than two million Iraqis, as well as sweep flood water at a distance of 500 km within along the course of the Tigris River, sweeping aside in front of everything on the ground and will immerse water in large parts of the Baghdad up to four meters high.
The disaster the most dangerous of the disaster is expected collapse of Mosul Dam is to ignore the governments that came to power in Iraq after the fall of the regime Baathist the warnings of the world and specialized bodies, In a report included a comprehensive assessment included a frightening facts presented by the dams experts and specialists geologists in the US Army Corps of Engineers in September 2006, that the risk of the collapse of the dam list and expected to occur at any moment Mushir to the continued erosion of the foundations of the dam and its foundations, and that the consequences of the collapse would be disastrous, and provided alternatives and solutions to address and remedy this disaster to occur, but the efforts to prevent this collapse occurs, it may complicated by the periodic meetings between the Iraqi government and US side It was taking place behind the scenes at the time for fear of spreading confusion and panic among Iraqis, as a result of the lack of seriousness of the Iraqi side and rejected the allocation of the necessary funds from the Iraqi government to install the dam, which was estimated at the time up to six million dollars. As well as the case recommended that the US Army Corps of Engineers report the need to act immediately set up as a precautionary measure dam Badush the event of a collapse, added to the building of a dam in the downstream to be Msadda to Seoul, but the Iraqi government refused to alternative solutions, citing that it is unnecessary and costly.