Source from within the Dawa Party: moves to arrange a reconciliation between al-Maliki and al-Abadi (details)

Source from within the Dawa Party: moves to arrange a reconciliation between al-Maliki and al-Abadi (details) 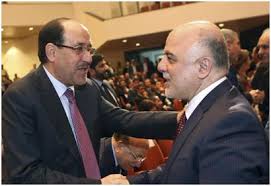 Fighting a group of members of the Islamic Dawa Party meetings and meetings with the leaders of the party in order to arrange a meeting between Haider al-Abadi and Nuri al-Maliki aimed at resolving the differences between them.

A source from within the party, for ‘overtures are underway to hold the meeting, due to be attended by all party members, and be a dialogue in which open , to solve the differences that party was hit recently ‘, adding that’ Preliminaries may take a long time ‘.

He said’ some leaders expressed enthusiasm for the idea associated mainly to arrange periodic conference of the party, which has been postponed several times for reasons some of the development of the country, and the last differences between the poles of the party ‘, pointing out that’ a number of party members have formed an internal committee and started consultation with the leaders to resolve all the differences’.