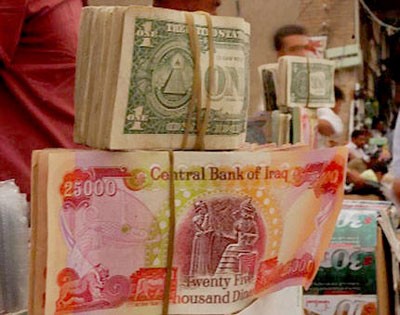 The Central Bank, on Wednesday, the dollar exchange rate will remain high, if not all government parties agree with the bank on violators accountable, and as pointed out attempt Bank re-market to normal, economists favored the continuation of the dollar exchange rate closed higher with lower oil prices. said Member of the Board of the Central Bank, Majid picture that the central bank tried more than one way to reduce the dollar exchange rate after Azdiadh for a long time, but this does not work there are so many Marqlat as the existence of monopolists in the cash markets. He added the picture that ‘the central bank gave an increase of 25% the share of sales that was giving it to banks in accordance with the law with the increasing demand for the dollar, and in spite of increased pumping the dollar in the Iraqi market, but that exchange rates increased the most in a sudden incident ‘attributing this to’ the existence of beneficiaries are behind the increase. ” He stressed that the ‘exchange rates The dollar will not go down at all what the central bank and the government and the Finance Ministry did not collect a single policy and the development of plans and to punish the offenders ‘, noting that’ the bank is trying to re-market to normal in the coming days. ” , the economist said, Maitham coffee, ‘There is a general trend and long-term expectations, suggesting the dollar prices will remain at high limits, a pessimistic outlook on the most likely ‘. He said ‘these expectations caused by the passage of the oil phase of a global game of falling prices, and the subsequent austerity budget in addition to the political and security situation unstable’ , stressing that ‘the dollar will live fluctuations stage in the next phase. ” He continued by saying that ‘the case of the stability of the dollar or not will be determined according to the procedures carried out by the Central Bank through its tools which affect the public, where there is the rise of short and landing-term movement, as well as there is an upward trend long pessimist term ‘. I consider economic adviser to the prime minister appearance of Mohammed Saleh, in (June 1, 2015), the high dollar in the market price ‘order mastermind’ of actors seeking to projects profitability, and called for a ‘practical measures’ to avoid this thing. Economic Adviser to the Prime Minister, that sees rise in price of the dollar in the market ‘is the mastermind’ led by the views undisclosed, pointing out that the central bank ‘was forced to increase the sales proportion of hard currency in the market since last week to cope with this increase. ” He added that the ‘price percent dollar exchange stood at 130 thousand dinars in the past few days’, but ‘we were surprised after his rise oversupply in the central bank’. He pointed out that ‘there is currently a monopoly market views, and benefit from the rise of the dollar affiliated projects’, demanding B’oda controls in order to maintain the exchange rate process ‘, pointing out that’ there is no relationship between the process of deleting the zeros and the rise of the dollar exchange rate, the fact that this process ‘carried out when the stability of the exchange rate’, ruling now be removed within a period close. For his part, attributed the deputy in the Alliance National honest we hinted, in the (April 29, 2015), the high prices of the dollar against the Iraqi dinar, as well as gold to the instability of the region and control of the United States to the global economy. He said we hinted that the ‘dollar prices rise, as well as gold came against the backdrop of the United States and other major countries control this aspect and instability in the region ‘, stressing that’ the great powers have their own agendas to raise the value of its currency is not interested in who gets the negative impact on other countries’.