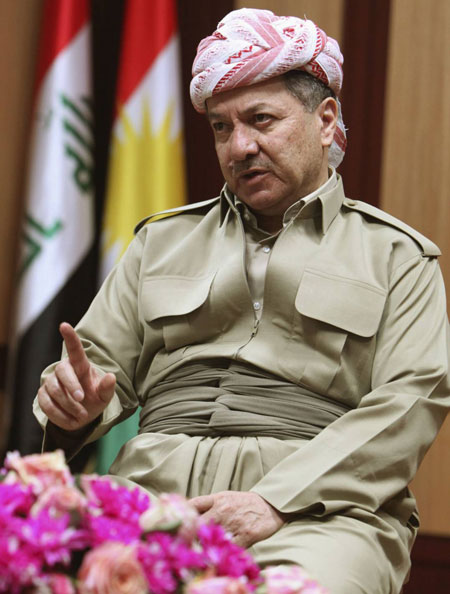 The head of the Kurdistan region, Massoud Barzani, that the results of his visit to Washington and his meeting with US President Barack Obama exceeded his expectations, stressing receiving “assurances” not to delay in sending weapons to the Peshmerga forces.
Barzani said that “our meeting and our meeting in Washington, the results were more than we have been waiting “stressing” to obtain a full assurances at the state level from the United States that the weapons will not reach the late Kurdistan especially necessary, such as tanks. ” and ended Friday Kurdistan Region President’s visit to the United States, which lasted an entire week during which Barzani held several meetings with US officials led by President Barack Obama. Among the most prominent files that touched her Barzani, according to Kurdish sources, is the future of Kurdistan after the completion of the organization of the Islamic state and the right formation of a Kurdish state, in the long term. The President of the Kurdistan region delivered several lectures in institutes and centers policy research and strategic American aim Marketing for secession and the formation of the State of Kurdistan. In a speech to the Atlantic Council in Washington Research Center, Barzani said that “the unity of Iraq remain optional rather than mandatory.” Barzani believes that the approach of “an effort to configure a separate Kurdish state in Iraq must convince the international community and especially the United States of America the need to take a number of steps in the forefront of arming the Peshmerga without passing through the Baghdad government. ” It seems that the head of the territory of northern Iraq has got goals only in terms of armament, where he confirmed at the conclusion of his visit, he got a US pledges extended his troops in arms in the face of the organization of the Islamic state. But do not know whether the US administration will carry out arming the Peshmerga without passing through the Baghdad government, especially since today there is considerable dispute between the White House and Congress on this particular point. US The Ministry of Defense expressed its objection to this, as Carter said, “I understand the desire of Congress to overcome the Iraqi government, to arm the Kurds and some groups directly, but we are opposed to such a move, because we believe that a united Iraq holds sensitive importance of the defeat Daash in the long term. ” On the other hand insists Congress to send military aid to the territory of northern Iraq directly, through the draft put forward recently. Barzani’s visit to the United States, talking about the success of the absolute, comes at a time when the region is preparing to choose a new president and stipulates the draft, which is a bill the US military budget for 2016 provided by the Armed Services Committee, the House of Representatives in Congress, the use of 25 percent of at least $ 715 million dedicated to support Iraq in the fight against Daash, military aid directly to the Kurdish Peshmerga forces, local Sunni forces, the National Guard of the sons of the year. This disagreement between the US administration and Congress, Barzani tried to avoid in his remarks in front of public opinion when he said at a conference of the Council of the Atlantic (research institution in the field of international affairs) “The important thing is we get the weapons, it is not important so much how they arrive and in what ways.” He explained that US officials whom he met, gave him assurances about the Peshmerga get their share of aid to the Iraqi army. In addition to the issue of armament favored by Barzani that It is directly, sought in the context of building a “dream” of secession to persuade US officials to stand by his side in addressing the Iranian scheme Courier to the separation of Sulaimaniyah and the establishment of a new province under the supervision of the Patriotic Union of Kurdistan (PUK) led by historical rival, Jalal Talabani, and that would disrupt the formation state process Kurdish. It should be noted that the issue of the separation of Sulaymaniyah has become the main concern of many politicians, journalists and intellectuals in the region between Mureed her and dismissive, especially that this case feed from the old conflict between the two parties and between Barzani and Talabani in the reign of the late President Saddam Hussein. It is expected that the United States provides support required for the President of the Kurdistan region to thwart this scheme, which would strengthen Iran’s influence in Iraq. Barzani’s visit to the United States and speaking of the absolute success, comes at a time when the region is preparing to choose a new president. Observers believe that Barzani chose this particular time to do the visit to drum up support for it, and to show himself that he is able to walk towards the Kurdish dream. He was elected Barzani, president of the region for the first time in 2005 in direct elections, as he was elected by Parliament for a second time in 2009, it has fulfilled a legal in 2013, but the region’s parliament extended his term until August 2015, and seeks to extend again. And the National Union Party rejects extension Barzani, as that is contrary to the Constitution.