Maliki: I reject Obama’s accusations of sectarianism me .. Washington was warned of the “Arab Spring”!

Maliki: I reject Obama’s accusations of sectarianism me .. Washington was warned of the “Arab Spring”! 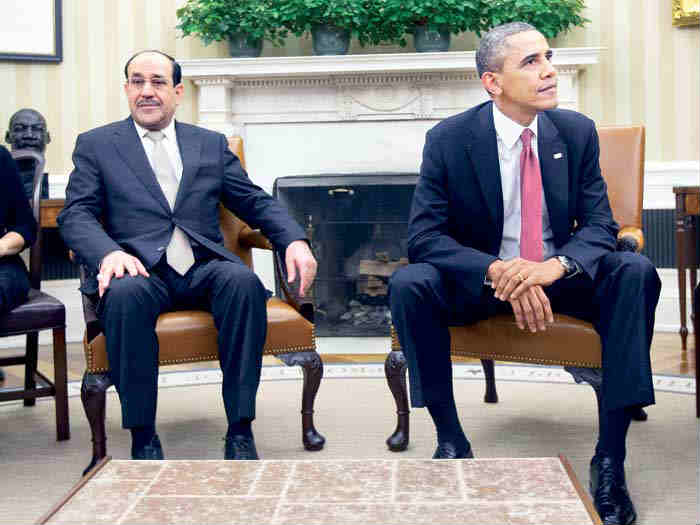 Said First Deputy Iraqi President Nouri al-Maliki, the policies included in President Barack Obama’s remarks accusing him during his presidency of the Iraqi government sectarianism and responsibility for the existence of the organization, “Daash” in Iraq and occupation of parts of it, that indictment is not justified and reflects the state of confusion that prevailed in the US administration in dealing with the situation general in the region and the world, especially with regard to Syria and Iraq .. He said: “The statements deliberately ignore a number of obvious facts in an effort to mislead the American and world public opinion.”
Al-Maliki said that “the former Iraqi government is committed to the Iraqi constitution in the face of terrorist groups of the Iraqi cities, and defended the components of the Iraqi people, without exception, also addressed the outlaws of Sunnis and Shiites alike, and the previous government accused of sectarianism stems from a political background, is the charge as long as echoed by owners sectarian agenda that is no longer a secret to. ”
Maliki felt that the organization “Daash” is the first beneficiary of the remarks “irresponsible or unwarranted President Barack Obama,” and said that continuing to launch these statements will lead to the weakening of the resolve of the security forces in their battle fateful with terrorists at the time only the US administration to carry out air strikes exhibition.
He explained a spokesman for al-Maliki At a press statement today (Saturday) – The United States and its allies of countries in the region have committed a grave mistake when I tried to exploit the organization Daash Front victory as tools to topple the regime in Syria, a policy that has contributed significantly to the growing ability of the organization and its expansion into Iraq The rest of the region.
He added that the organization Daash is a natural extension of al Qaeda, which the Iraqis fought with the support of their friends in the previous US administration (George W. Bush), and the security forces managed to deal a fatal blows to the base before the withdrawal of US troops from Iraq by the end of 2011, but the outbreak of unrest in Syria and design Washington and its allies to bring down the Syrian regime’s military has contributed significantly to the birth of the organization “Daash” Front victory and others, to expand Daash from Syria to Iraq and then to Jordan, Egypt, Libya and Yemen.
He continued the spokesman, “President Barack Obama knows very well that Iraq had warned the US administration since the early days of the outbreak of the so-called revolutions of the Arab Spring of the danger of growing extremist organizations and create chaos and unrest in the Arab countries and including a negative impact directly on the security and stability in the region and the world, and something to the big question marks is to ignore the US administration warnings Iraq frequent, especially during the visit by al-Maliki to the United States late in 2011, Iraq did not stop his warnings successive until the Daash attack on Mosul amid a state of indifference in Washington, and to encourage the capitals of the region. ”

And went on, “the former Iraqi government has told the US administration on the Daash establishment of camps in the land between Iraq and Syria, the depth of the US government and demanded to fulfill their obligations toward Iraq in accordance with the Strategic Framework Agreement signed between the two countries, but the US administration along with procrastination committed, also appealed to Iraq over the US administration delivered aircraft, weapons and military equipment, which contracted to purchase and pay for it, but Washington did not listen to warnings Baghdad also did not respond to the appeals of arming the security forces with the necessary equipment to be able to hit and destroy the terrorist camps before they approach the Iraqi cities and to attack Mosul. ”