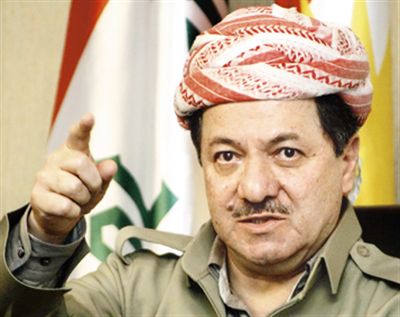 BAGHDAD / news / Samer Mohammed
stressed Chairman Massoud Barzani province, on Saturday, that the ‘Sunni Arabs in Iraq are the largest of the war launched by the loser (Daash), as he emphasized that’ the borders inherited from agreements Sykes – Picot are artificial borders and new frontiers in the region draw blood within and between countries ‘, he noted that’ former Prime Minister Nuri al-Maliki has a grudge Devin. ”
Barzani said in an interview with Al-Hayat, seen by the (news) today, saying that ‘the borders inherited from Sykes agreements – Pico are the limits of artificial and that the new borders in the region draw blood within and between countries, pointing also to what is happening in Syria, Yemen and other countries, Mshiddedda that ‘Iraq needs to be another formula if it is to remain united.’
promised ‘Sunni Arabs in Iraq They are the biggest losers of the war launched by (Daash) as they spin in their areas and cause the destruction of their towns and villages. And urge them to move quickly to renounce the terrorists and fight them, and the formation of political leadership to pronounce their name, as he emphasized ‘the effectiveness of raids by the international coalition’, he noted that ‘without this assistance the war will take longer and losses greater human’.
He said the President of Kurdistan, to be ‘ Iran took the initiative to provide assistance after a meeting with Brigadier General Qassem Soleimani, and sent to Erbil two planes loaded with munitions and still help from time to time ‘.
The Bhsos premier relationship deteriorating situation, Barzani said, he ‘tried in vain to persuade Nuri al-Maliki, former Prime Minister that (Daash) attend something against Mosul and others, and that after the messages failed over others, telephoned him reply was al-Maliki (the situation is under control), pointing out that the practices of al-Maliki has shown the hatred buried on the Kurds. ”
He added, Barzani that ‘preoccupation with developments accelerated so far prevented a meeting between him and Prime Minister single-Abadi, hoping to meet him in Baghdad or Arbil ‘, in what was described Ebadi as a’ last-ditch attempt to save Iraq, he stressed that Iraq’s past failure and a pressing need for a new version if the extent of the country to remain united.
He declined Barzani entry of any forces to Kirkuk, asserting that (Peshmerga) do not need to troops backed by repeated: ‘Kirkuk will not fall in the hands of Daash’, adding that ‘Daash did not expect the fall of Mosul in the hand, but the collapse of the Iraqi military teams was swift, encouraged anti-process forces political, including the Baath, with Daash to participate in the control of large areas’, adding that ‘hit the gains of the Kurdish people was at the forefront of the items on the agenda Daash’.