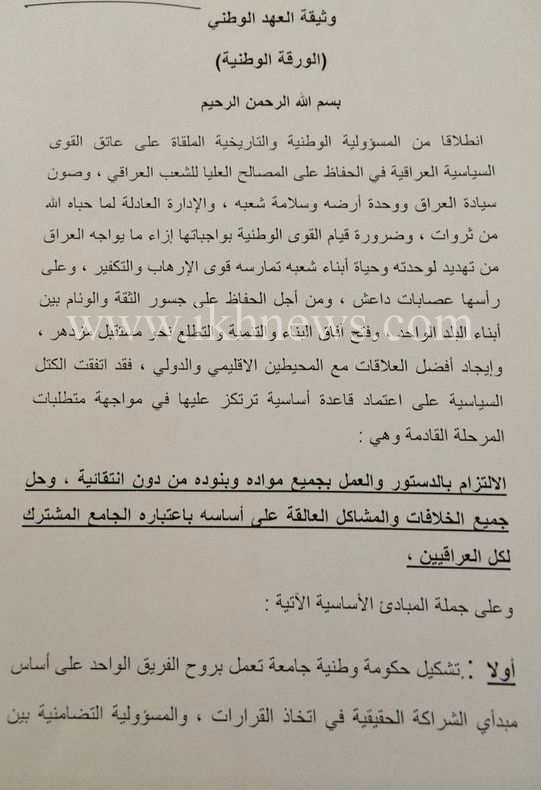 I got News Agency on the text of the document ‘national paper’ presented by the National Alliance to political blocs to agree on the formation of the Iraqi government, headed by Haidar al-Abbadi, at the time described the participants in the negotiating committee on the formation of the Iraqi government that the panel discussion was poor and did not come out the results satisfy any of the parties negotiations.
According to the document, the National Alliance on some blocks adoption of base essential to the formation of the Iraqi government, including maintaining the troops ‘popular crowd’ and handed over the security file in the Iraqi provinces, with finding solutions to the issues of contention between the Kurdistan region and the federal government in Baghdad.
According to the document obtained by the agency ‘news’ to read today (Friday, August 29 / August 2014), the coalition calls for’ the formation of a national government University are working as one team on the basis of the principles of genuine partnership in decision-making and responsibility of solidarity between the limbs and exercise its functions in accordance with the powers and constitutional contexts and legal ‘.
The document emphasizes the need for ‘parking all political forces to participate in a national unity government ranks in the fight against terrorism and the liberation of the Iraqi territories of control Daash and like-minded terrorist groups and militias and ending inventory of arms in the hands of State’.
She pointed to the reconstruction of areas devastated by the terrorists while providing havens suitable for the displaced and the preparation of a comprehensive national plan to meet their humanity until they return to their homes, also stressed the need to reconsider during a period of six months, in a way manage the security file in accordance with the Constitution and ensure the rebuilding of the armed forces and upgradation professional, and be representative of all components of the Iraqi people.
In item VI confirmed the document on ‘development experience of popular mobilization and work to make them after a national standardized serves the national reconciliation process, and that the formation of the system of the National Guard as a generic for the army and the police have specific tasks aimed to make the column foundation in running the security file in the provinces that begin this Law in duration than three months’.
The document also on a range of items, including the fight against corruption, and to ensure the independence of the judiciary, and to enable the legislature to take its oversight role and updating legislation what Bahdtha laws with modified rules of procedure of the House of Representatives during the period of three months, with the achievement of a balanced representation of the components in public jobs through the enactment of the Public Authority to ensure the balance and the formation of the federal service during a period not exceeding six months.
Emphasis was placed on the adoption of the rules of procedure of the Council of Ministers within three months, with the resolution of the dispute over the link independent bodies, and activate the work of the Commission on the jaw and insulation problem to resolve the dispute over the ownership of the properties of Endowments, with an emphasis on the need for commitment to all state institutions, especially the security principles of human rights to ensure the preservation of on public freedoms, and the emphasis on the completion of the formation of the Human Rights Commission during the period of three months.
And allocated document five items of disagreements the relationship between the Kurdistan region and the federal government, where he confirmed the item fifteenth on the development of laws and contexts used in regulating the relationship between the governments in Baghdad and Kurdistan and the local governments of the provinces is Almertbah province, and’aejad effective solutions to all outstanding problems and to preserve the prestige of the state and cohesion ‘ , and the enactment of the Public Authority to monitor the allocation of federal revenues.
The document stressed the need to ‘commitment to political forces to participate in a national unity government to find appropriate solutions to what has emerged from the disagreements on the extraction of oil and gas in the Kurdistan region by following the constitutional mechanisms and regulate all matters relating to this wealth in the enactment of the oil and gas, distribution and financial resources during a period of six months ‘.
The Government is committed to (according to the document) to calculate the advance release of Kurdistan immediately after the ratification of the new range against the Government’s commitment to the region within one month of starting to hand over the amount of oil produced from the fields of Kurdistan to be exported via the Federal Ministry of Oil.
It also confirmed the document to find appropriate solutions to the problem of Kirkuk and other disputed territories in the framework of Article (140) within one year, in order to preserve civil peace between the components of the population, taking into account the compatibility between these components, is also committed to the government within three months of supplying the Peshmerga with the necessary capacities in the framework of the project formation Forces ‘National Guard’ to protect the province and all Iraqi provinces within the system of national defense.
In conclusion, the document confirms its provisions textured activate Article (142) for the formation of a committee to review the constitution within three months to find the constitutional amendments ‘which desperately needed in the light of the experience revealed by the referee in the previous stage.